Team rider Blondey McCoy takes one of the new Krooked x Slam City boards for a lap of Covent Garden whilst Gonz watches from a far.

We’ve stocked Krooked boards since Mark Gonzales started founded the company under DLX in 2002. When the first black ‘Zig Zaggers’ arrived at the shop, they were unlike anything available at the time. Yet Mark Gonzales’ unique approach to street skateboarding has long been coupled with experimentation of of different board shapes.

All these years later, the Cruiser shape has become more common; from the secondary set-up for a lifelong skateboarders to primary plank of the more casual skateboarder. 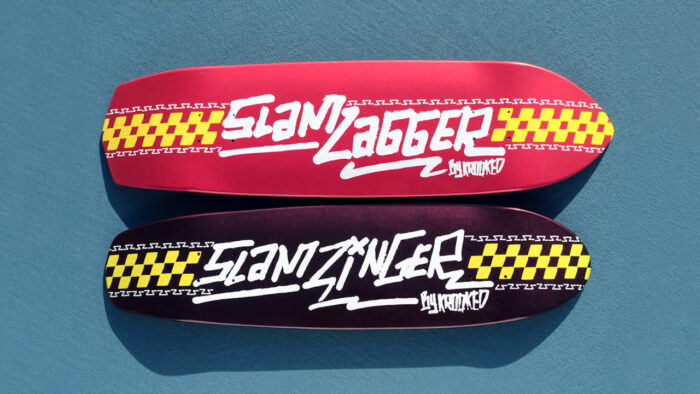 Our collaboration with Krooked harkens back to those early memories of seeing the ‘Zip Zinger’. Both it and big brother, the ‘Zip Zagger’, feature an the OG racing stripe in metallic red or black. Gonz’s unmistakable lettering tops it off with our shop name incorporated alongside the shape of choice.

Slam City team rider Blondey McCoy has struck up a friendship with the Gonz after many adidas trips together, making Mark’s appearance in the above video more of special. Mark Jackson helmed the camera, taking a short trip from our Covent Garden shop, and may have even informed Blondey’s ender…

We hope you are as stoked on these boards as we are. The Krooked x Slam City ‘Zip Zinger’, ‘Zip Zagger’ and collaboration wheels are available from our Covent Garden store and slamcity.com