Gonz and Toby by Thomas Campbell 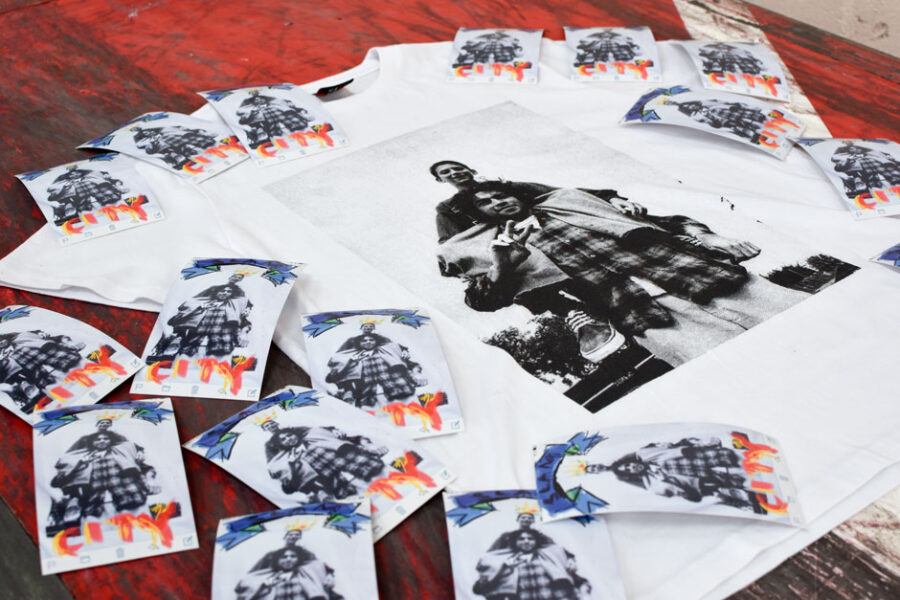 ‘Gonz and Toby’ – Thomas Campbell, Mark Gonzales and a young Toby Shuall collide via the medium of a Slam City tee.

This image of Toby Shuall sitting on Mark Gonzales’ shoulders first appeared in Transworld SKATEboarding and was shot by Thomas Campbell on a trip to London back in 1992. 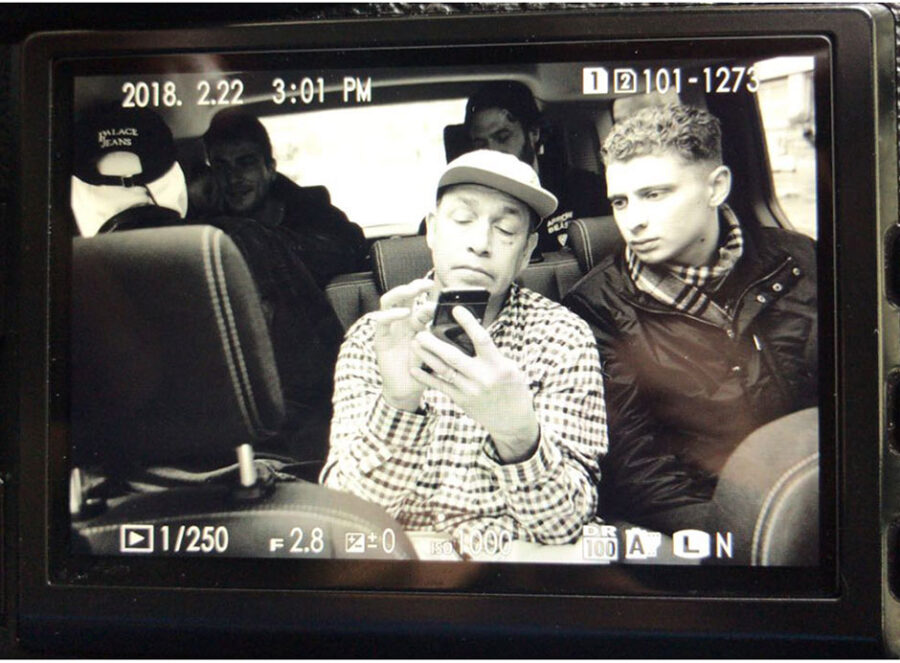 For many years, a photocopied version was mounted on the wall of our Covent Garden shop, getting more dog-eared as the years went by. It’s an image almost synonymous with Slam City, having kept staff company and greeted many a passing customer.

What follows below is Toby’s account of how this image came to be. It was a magical, simpler time and he paints the picture well.

This photo was taken way back when I was 14. For the record I’m now 40 and I still remember the photo being taken.

Firstly, I would like to say I was given so much shit for this when I was kid. Skaters were not nice to each other when I was growing up. A lot of people fucked with me about this for years, certainly at the the time when it came out in TransWorld. Times were different back then, that’s for sure.

It was the summer of 1992 and this image was taken in the carpark outside Harrow Skate Park, where I grew up skating. That year, New Deal Distribution who distributed Real, New Deal, Black Label and some other old school brands at the time had organised a tour of the U.K. with some Americians. Steve Douglas would have basically sorted this out, as Ray and Gary who owned the distribution company had no idea who was who in skateboarding.

They had just started distributing Milk which was Ron Chatman’s company. Christian Hosoi had a board but he was on the meth, I think, attempting one of his comebacks. All the graphics for Milk were done by Gonz but he didn’t skate for it. In fact, he had quit all sponsorship and was just skating for himself. He didn’t want to be pro anymore. He told me he had done all the Milk graphics in exchange for a ticket to Europe, to go on the tour everyone was going on. There was hardly any money in skating at that point. For anyone to get a flight to Europe, a hotel and maybe some money to eat was a big deal. No one in skateboarding was making anything so it was pretty amazing when all these American dudes turned up at Harrow.

Milk was a loss for Ray and Gary, I reckon. They were pretty skint from the whole thing as they had to put all these dudes up in a hotel. Milk was very short lived and, as mentioned, they were distributing these companies on advice from Steve Douglas. When Ron Chatman turned up with the Gonz, they had no idea who he was and neither did I.

I hadn’t yet seen Video Days, only 1281 and Useless Wooden Toys. I was 14 and I was basically stuck in Harrow. You had to go to town, to Slam City, to see stuff that New Deal didn’t distribute. I did see Video Days straight away, after meeting Gonz. After seeing him skate, I had to find out exactly who he was.

They sent my mate and I to the station with ten quid to meet them. We were instructed to get fish and chips if they were hungry. So, we go and pick up Gonz and Ron Chatman from Harrow and Wealdstone station. My first impression was that these are two of the weirdest people I had ever seen or met at this point in my life.

The Gonz had a clear plastic board bag – that you’d use to protect the graphic on a new board – with some clothes squashed into it. He’d tied a shoe lace and made into kind of a sausage bag. He had a shirt on his back, trousers and shoes, and that was it. Ron Chatman basically had a bag. We introduced ourselves and they were super nice and cool. We weren’t used warm, friendly people in fucked up clothes that didn’t give a shit and were happy with little kids coming to collect them. Thomas Campbell, who I had met a couple of days earlier and [John] Cardiel were equally dirty, scruffy and friendly. These meetings with these humans I have never forgotten. This was the first time in my life I had met free, enlightened spirits. People who didn’t give a fuck.

We asked if they were hungry, they said they we were, so we took them to the chippy explaining we’d been given money to get them fish and chips. They were hungry and happy to try this English delight. Ten quid covered two cod and chips but not much else. We got it for them, went outside and sat on our boards. They both asked if we were going to get some for ourselves but we didn’t have any money. They insisted on sharing the food with us. We were stoked because we were hungry but skint. It’s funny now I’m older, thinking about this. They didn’t even give us any money to get some food for going to collect them, we were doing their job. That was the magic of skating then. No money, no frills – send some little kids to collect the Gonz and Ron Chatman.

When we got back to the skatepark it was late afternoon. The park was quiet, just some kids and weirdoes around. I think all the other Americans had gone off elsewhere for the day. We started skating and I remember watching Gonz, thinking, “What the fuck! Who is this guy?” He was pumping around the park with his legs crossed on his board, doing bonelesses and all kinds of weird shit. This is the era of tiny wheels and baggy trousers. Really, it was one of skating’s worst times as people were skating slow and doing pressure flips. Out of the blue, he backside 360s the top of the fun box. That was hard. I realised this guy was incredible, he was flying around as free as bird.

I spent a lot of time with Gonz over the next couple of weeks. When Thomas Campbell took the photo, it was at the end of this time. I remember being so bummed to see all the Americans leave and Harrow turn back to the bland suburban place it was to me. There were more holidays left though and I was happy to not be at school. Summer ended and I went back to school where I was put in all of the bottom classes. I was destined to fail all of my GCSEs and become a genuine high school drop out. I knew all I wanted to do was skate and get the fuck out of Harrow. I wanted to go to America so badly. America was the mecca of skateboarding then. It looked like paradise and the people from there I had met were not like the people I had known all my life. They were nice, open minded and full of energy.

It took me two years to make it to America after that. But my encounter with the Gonz and all of the Americans that summer changed my life. All of them opened my mind. I had to go there and see it for myself, it was my destiny.

There you have it, the story behind this crazy Thomas Campbell photograph. Pick up the t-shirt and sticker here and enjoy this little clip of Gonz working on the latter.