This new First & Last interview is with none other than Mark Gonzales. Mark’s constant creativity, unique talent, and way of looking at things has influenced skateboarders the world over. He has remained a luminary for five decades, a pure love and obsession with skateboarding guiding his endeavours throughout. This is one of those cases where the ‘needs no introduction’ preamble couldn’t be more appropriate.

Mark’s legacy is interwoven with London, and his seminal Video Days part which opens south of the river is an easily accessed memory for many. Visits to the city predate that though, he would have first visited Slam a year after it opened it’s doors to shoot photos with Slam founder Paul Sunman. We are honoured to have received a few visits from the Gonz over the years and to have worked with him on some projects. We keenly remember a visit to our Neal’s Yard shop in later years where Mark left the building via a flying ninja kick over the counter.

Many of us have grown up looking to the godfather of street skating and we still are, decades later. He continues to prove we can keep doing this thing we love, and have fun doing it. Every new clip we are blessed with is always pure inspiration and often food for thought. Long may the MG magic light up our different devices. We had no idea this interview was going to happen but a case of kismet caught Mark on the fly between projects and ready to answer some questions. We hope you enjoy some insights from his past and present. 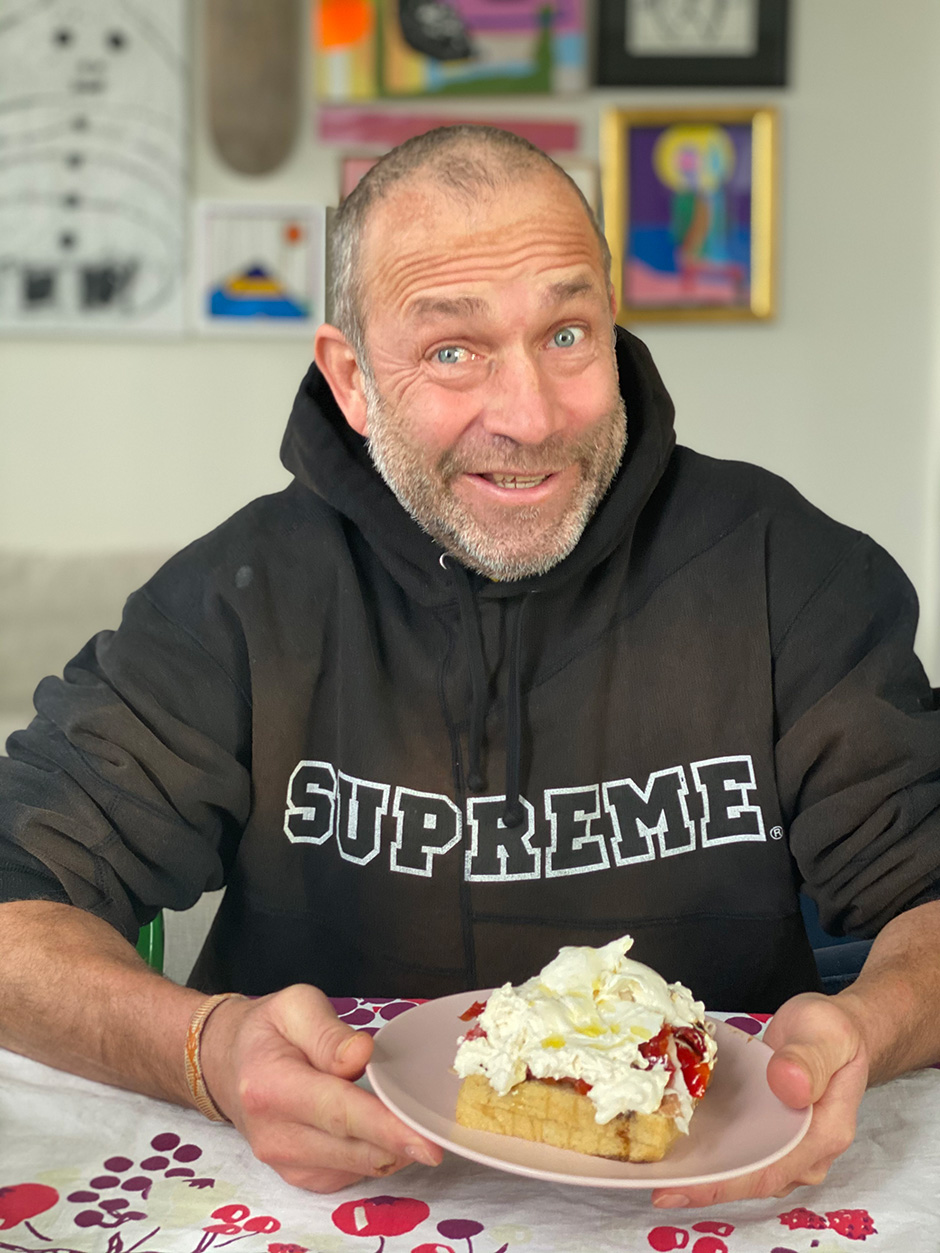 I think it must have been on television or something. The first pros I saw were Russ Howell and George Orton at Paramount skatepark.

I had a yellow plastic one that I got for Christmas

Me, my brother, and my friend Paul.

First ramp you felt in tune with?

Probably my friend Mike Ganz’ mini ramp. It was halfway in a garage and halfway out of it. I felt pretty comfortable on that ramp.

My first eggplant was at Skilly’s ramp in Westminster.

First graphic you had a hand in which came out exactly how you wanted?

The flower Vision board.

First person you skated with who inspired you?

First thing you saw go down that made you think skateboarding would never be the same afterwards?

First flip trick you fondly remember the process of de-mystifying?

First artist who resonated with you?

First trip to the UK and Europe?

I think I went to Slam when it was beneath Rough Trade records, that’s a long time ago.

Lloyd’s Bank in Santa Ana, that was super fun. I’d definitely have that back to normal again.

A disaster on a Lady Bug Phantom.

Last trick you did again you thought you may have done for the last time?

That was just recently, it was the debut album by Fine Young Cannibals.

Last thing you saw in the flesh which blew you away?

A small horse swimming at the beach.

Last random encounter which made your day?

My car started. I just saw something else but I can’t remember, it was somebody being helpful without expecting something in return.

Last film you saw which you would recommend?

I liked Trust, a series about the Getty family. I recommend it, it was entertaining.

I haven’t read a book in a while.

Last time you surprised yourself?

Recording myself and talking now.

Last thing which made you happy as a father?

I’m always happy as a father.

Last art project you finished you are most happy about?

I painted a super large painting I was pretty happy with. I couldn’t believe that I had started, and finished a super big painting.

Last time New York City inspired you as an artist?

Every day it inspires me, I love New York City.

We want to thank Mark Gonzales for the eternal inspiration and for taking the time out to entertain this one. We also want to thank his wife Tia for shooting his portrait and helping to make it happen. Thank you also to Science Vs Life for the cover scans from three September’s.