We are proud to bring you this Neil Blender interview. We are incredibly grateful that Neil wanted to speak to us and would like to thank all involved for making it happen… 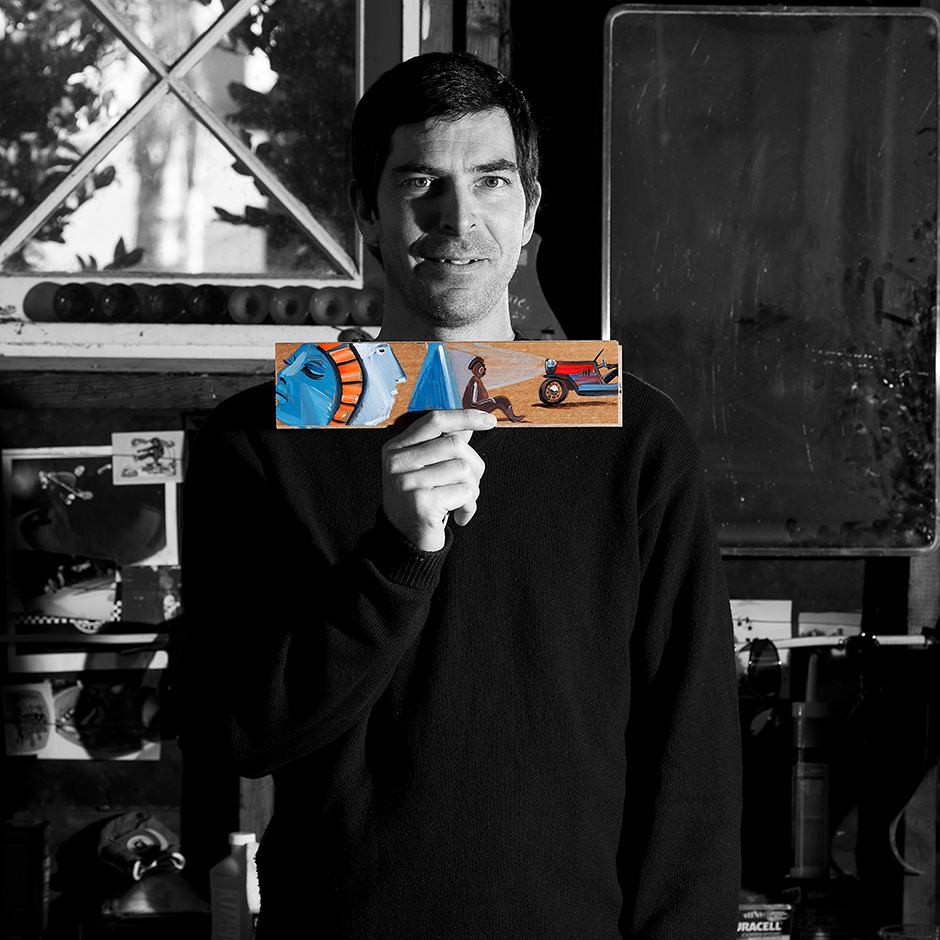 Neil Blender never really spoke much when he was busy defining modern skateboarding, and I don’t really think he needed to. The way he was riding his skateboard, the tricks he was inventing, the things he was drawing or writing, and even the clothes he was wearing would—either instantly or ultimately—progress the very idea of what skateboarding is, and what it can be. An utterly unique stylishness that went on to inform every aspect of a culture that didn’t so much define genres as introduce them; a faultless artistic outlook that set the standard for what we do, a generation-spanning influence that continues to be seen across skateboarding today.

He still doesn’t speak much, so I’m very grateful he took the time to answer a few questions about himself, and The Heated Wheel skateboard company. Here’s what he had to say, alongside some classic shots, and some images from the archives you may not have seen before. 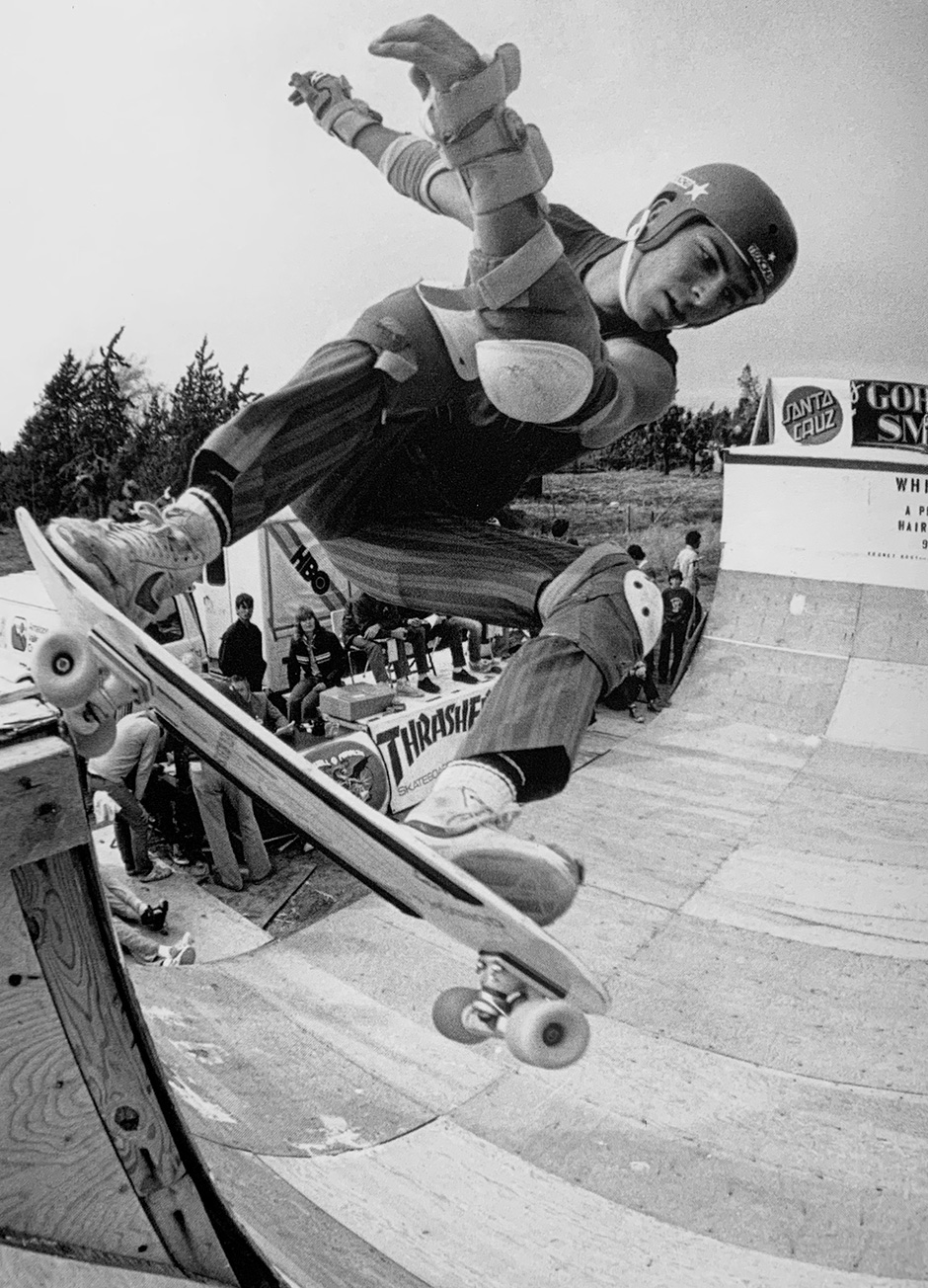 Over the edge in 1982. Alternative route captured by Glen E. Friedman

Have you been skateboarding lately?

Usually in the morning.

Is there anything in skateboarding that impresses you just now?

What was the first free stuff you got for being good at skateboarding?

A deck, some wheels, and some Tracker trucks. 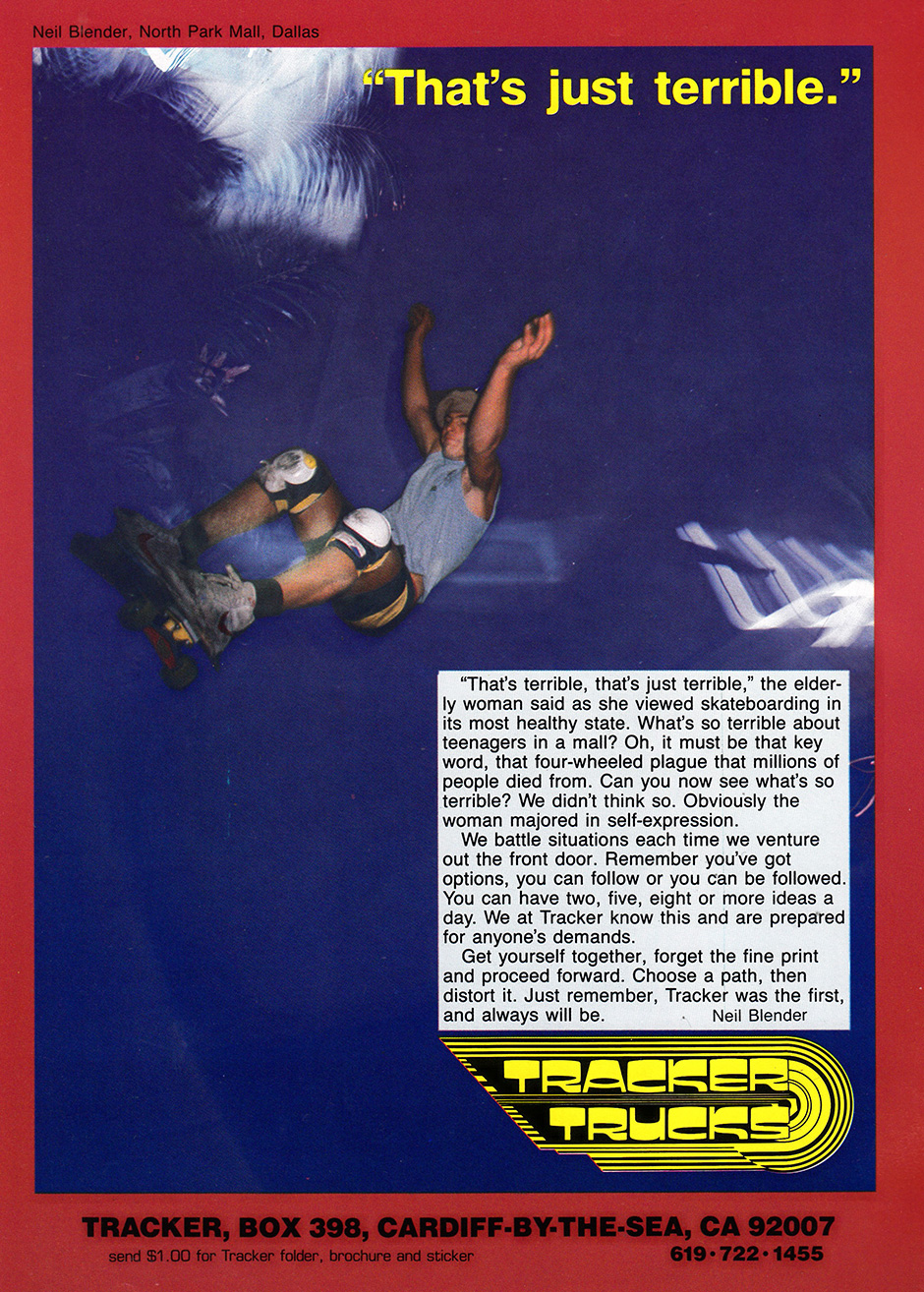 Did you ever watch any of your video parts?

What did you last talk to J Mascis about?

Which photographers were most fun to shoot with?

Never thought about it. 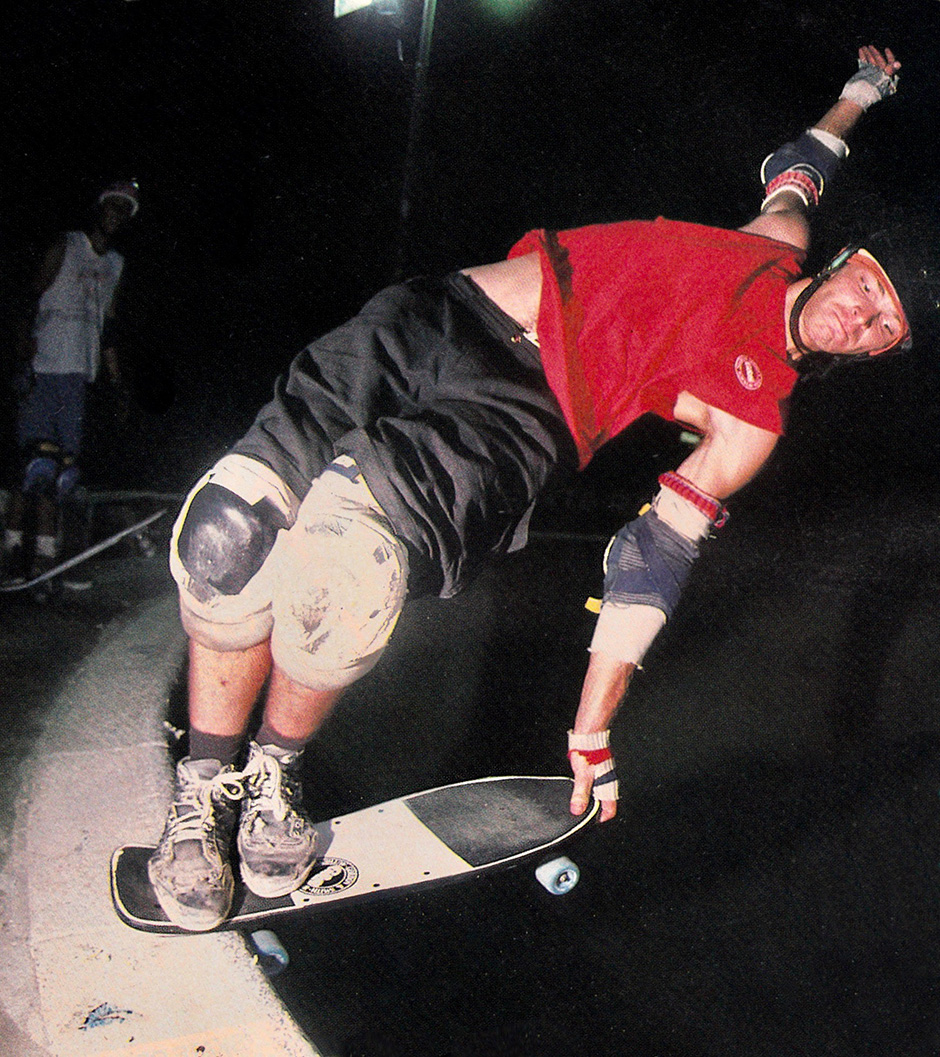 Definitely having fun in front of Tod Swank’s lens. Neil rockets two feet to the tail in 1986

Who did you look up to and respect when you were starting to skateboard?

Did the large amount of freestyle coverage in Transworld bother you?

It seemed like you created something completely original and it almost immediately became the industry-standard aesthetic. Did you think much about that? 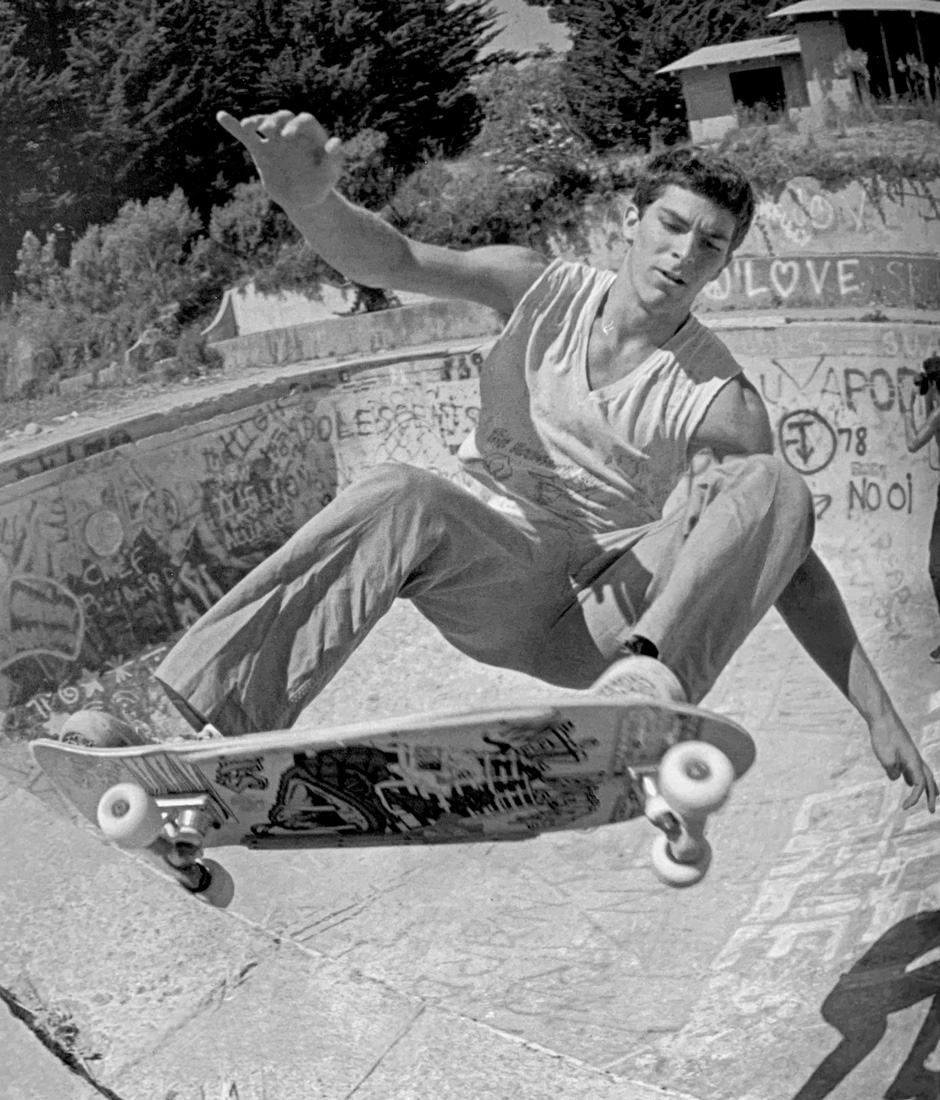 Did you buy any gold when you went out to Dayton?

Were you close to Duane Pitre when he quit?

Twelve feet from him.

I don’t want to talk about the Workshop. 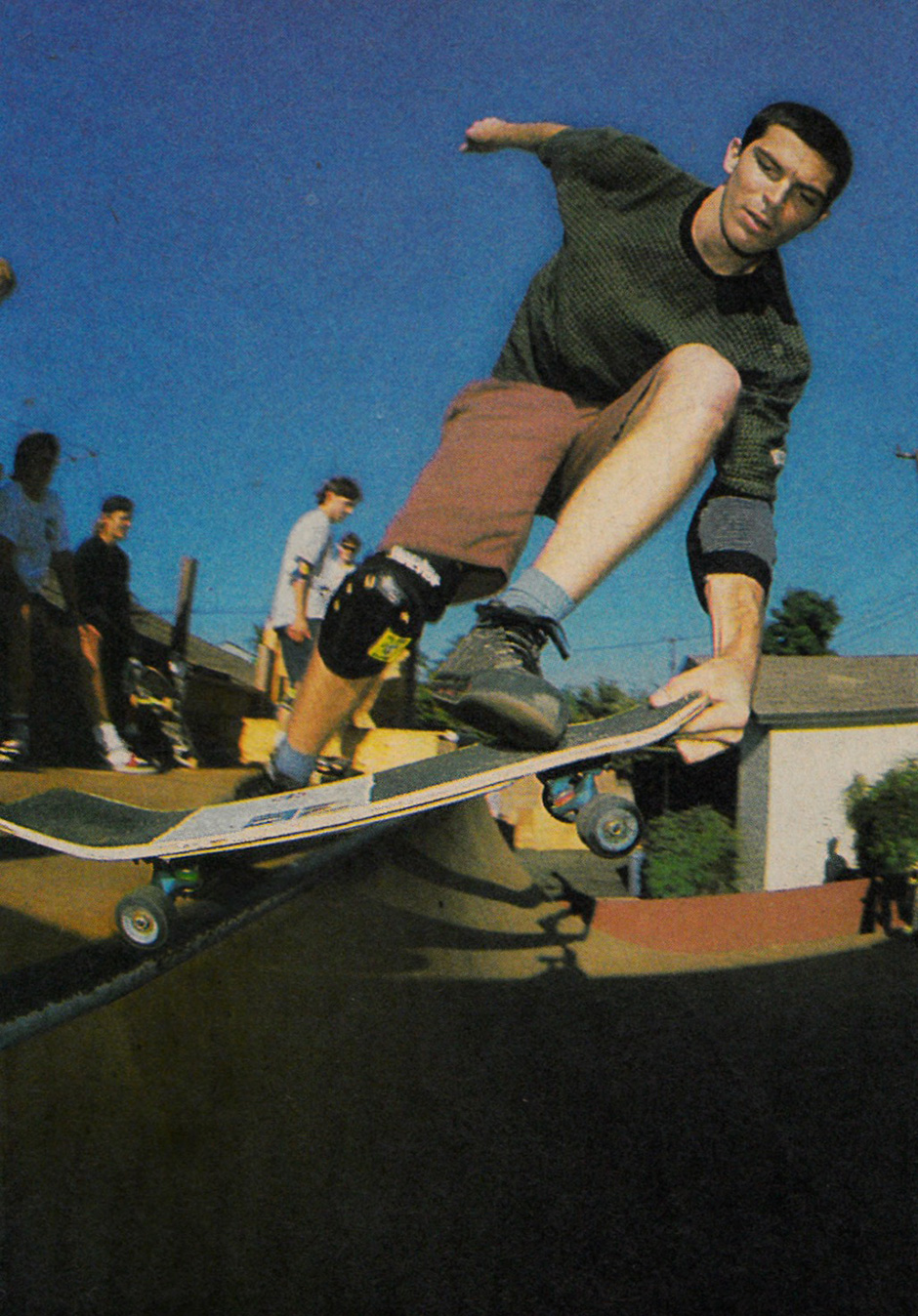 Can something new still be original? What was the last new, original thing you experienced?

What was the best ramp?

Is there anybody you’d want to be twins with, out of everybody who ever lived?

Do modern contests help skateboarding now in ways that old ones didn’t?

You said how the crowd can affect judging at a contest, but now that everybody’s online, everybody’s in the crowd, and the group mentality can affect anything. Should we be bothered by that?

Is the world more skateable now, or less skateable?

Why do you think PVC coping was allowed to exist for as long as it did?

Were you bummed when the concrete parks started getting demolished in the 1980s?

Bummed for sure, but the ramps that were there were fun. 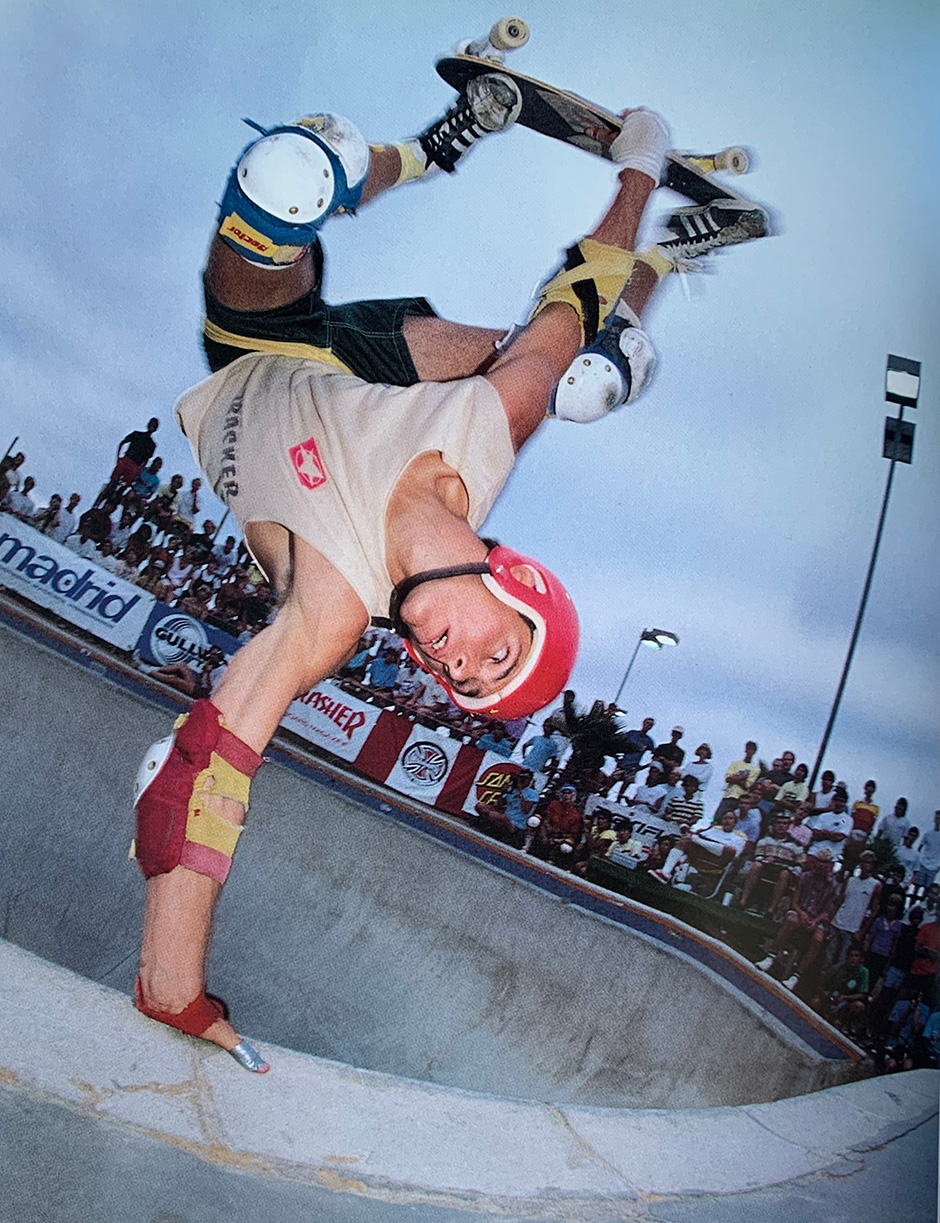 Where do you think skateboarding is headed?

What did the trampolines at Del Mar smell like?

Did you care much for the trucks G&S were making while you were on Tracker? Did they ask you to ride them ever? 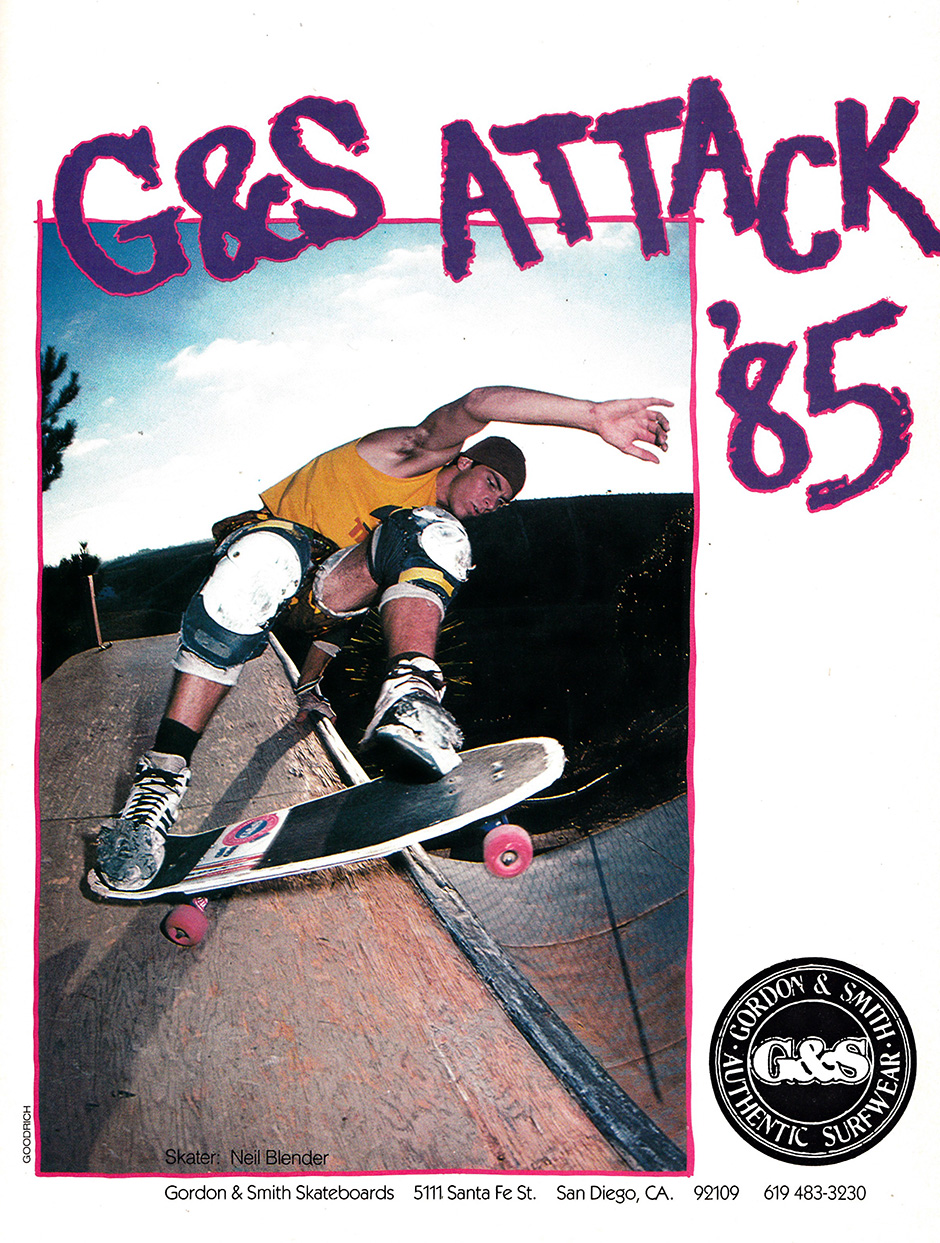 Have you seen Steve Claar lately?

Yeah, about five days ago. We jam tunes in the garage.

Can you count to twenty in another language? 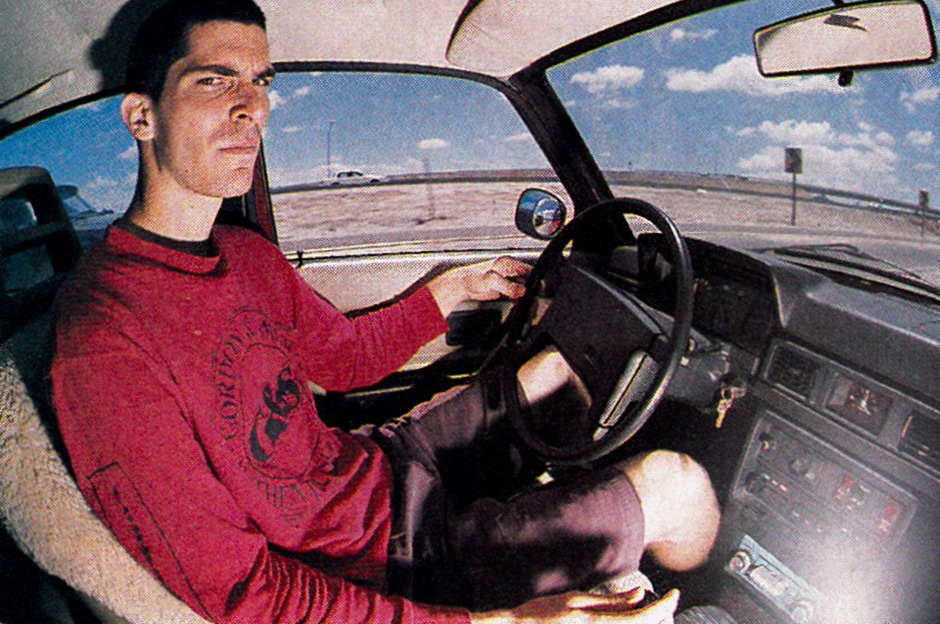 Which do you take more seriously, tea or coffee?

Is that actually tea in the cup on the ‘Coffee Break’ board?

Do you drive much? Did you ever get the Mercedes?

No, and I’m glad that I did not get a Mercedes. 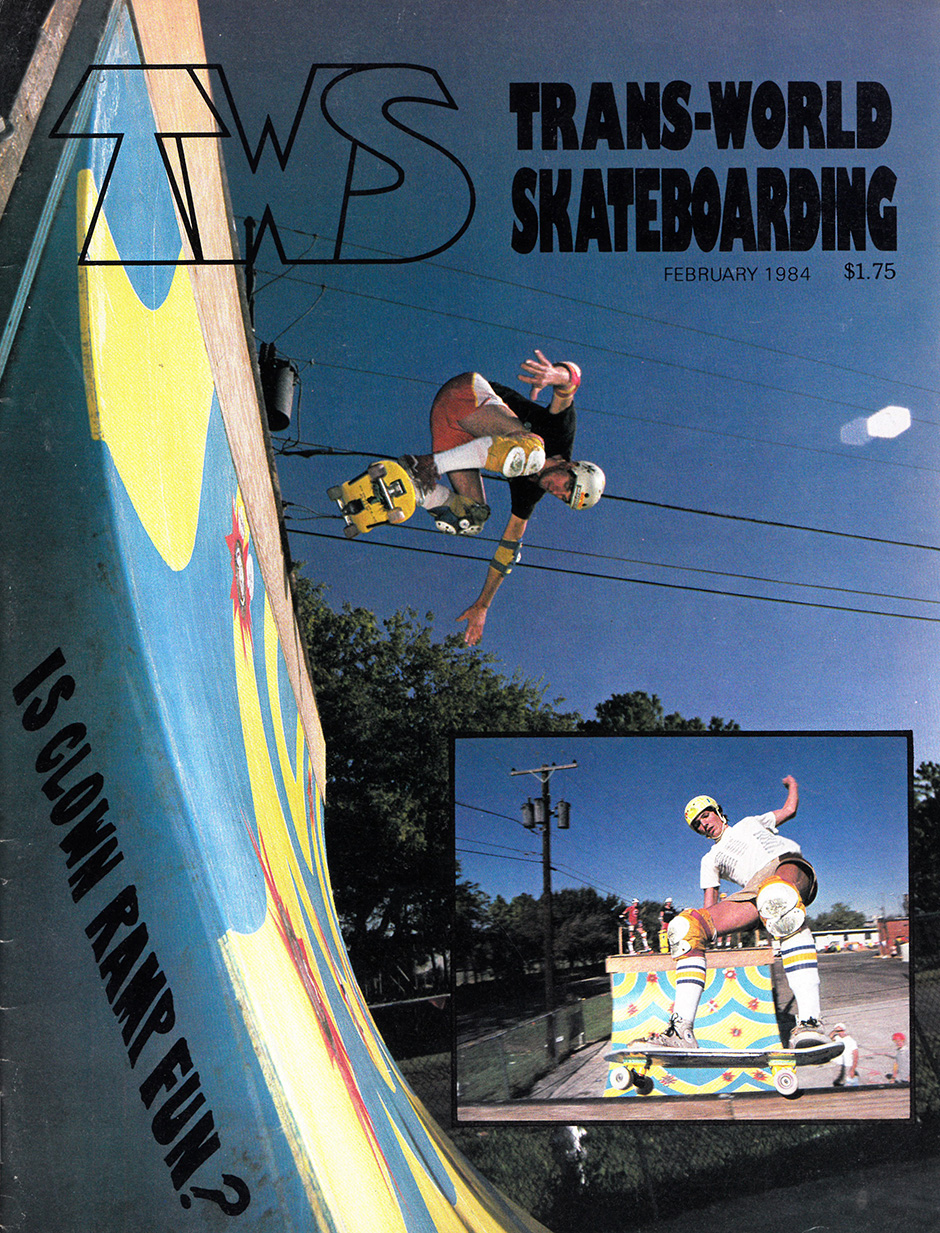 Texan TWS Cover. Craig Johnson and Jeff Phillips getting down at the Clown ramp

Who do you think skated the Clown Ramp best? Was if Jeff Philips?

Do you have a good Chris Miller story?

We were swimming in a pool at a contest at night, and there was some kind of beetle floating around in the water. We were looking at it, and he was a little further away, and said, “Let me see that, I’m an expert on bugs”. 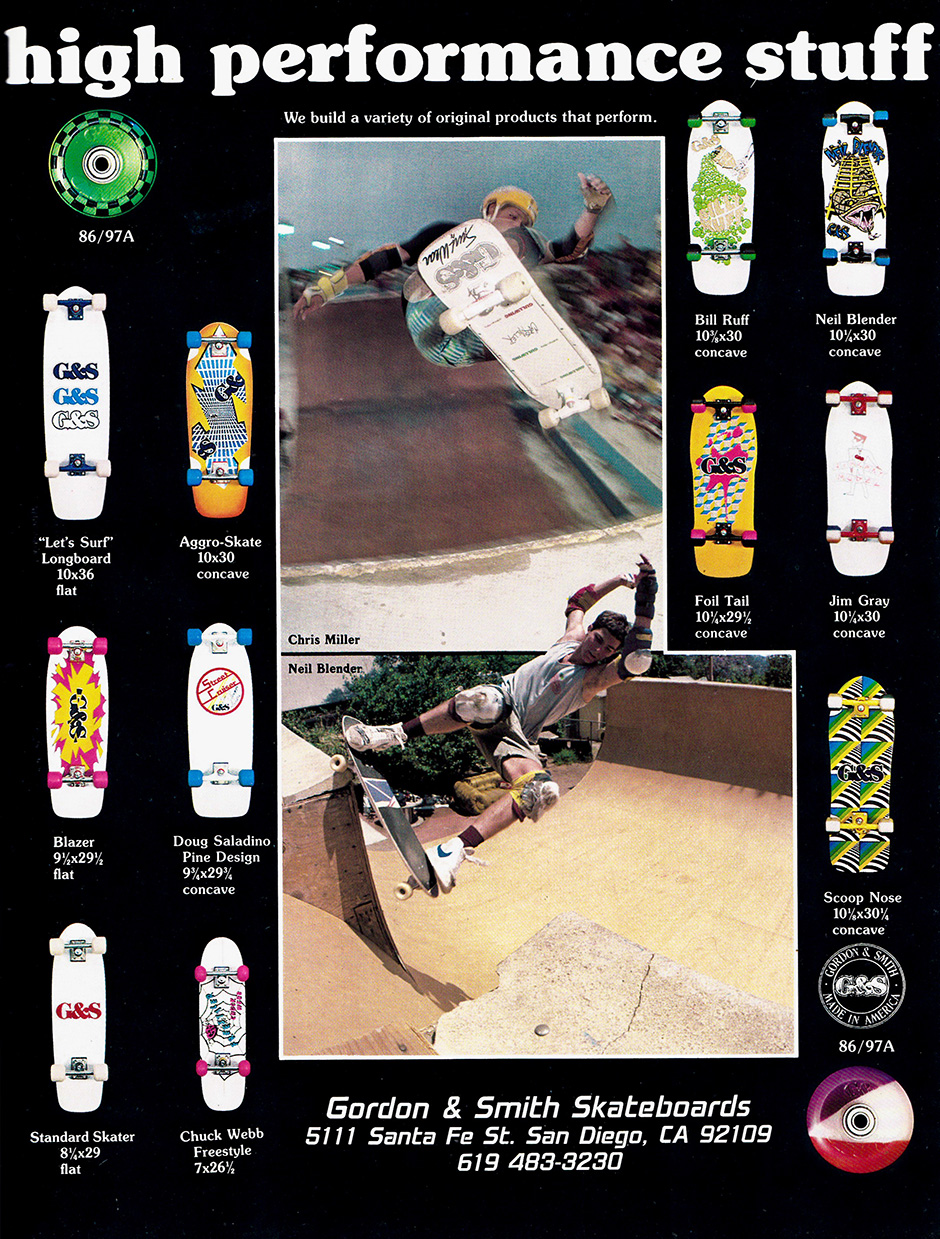 They don’t have to, but it’s always good to know where stuff started – like how skateboards came from rollerskating.

What plans do you have?

To live in peace. 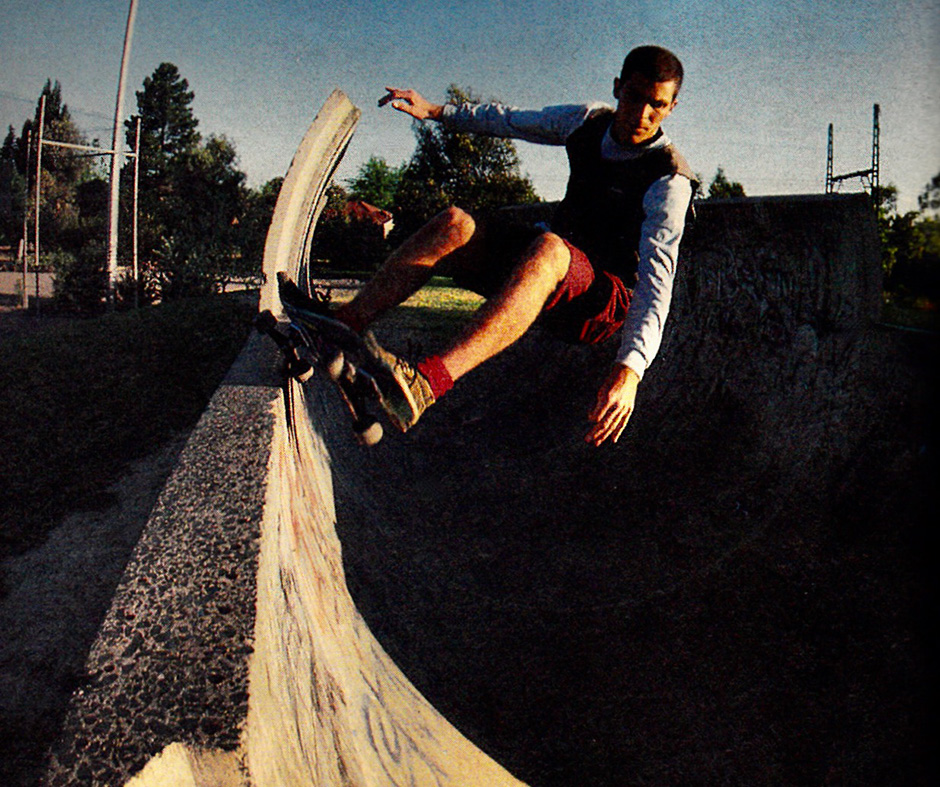 Heated Wheel is back up, so does that mean you’re enjoying the current state of skateboarding?

Can you talk about what the Heated Wheel is, please?

The Heated Wheel is a skateboard company. We make small boards too like, in the ‘60s and ‘70s: roller-skate truck boards.

Who picked the team?

Tom Remillard. He knows who rips.

Are you guys going to make a video?

We will probably make one someday. 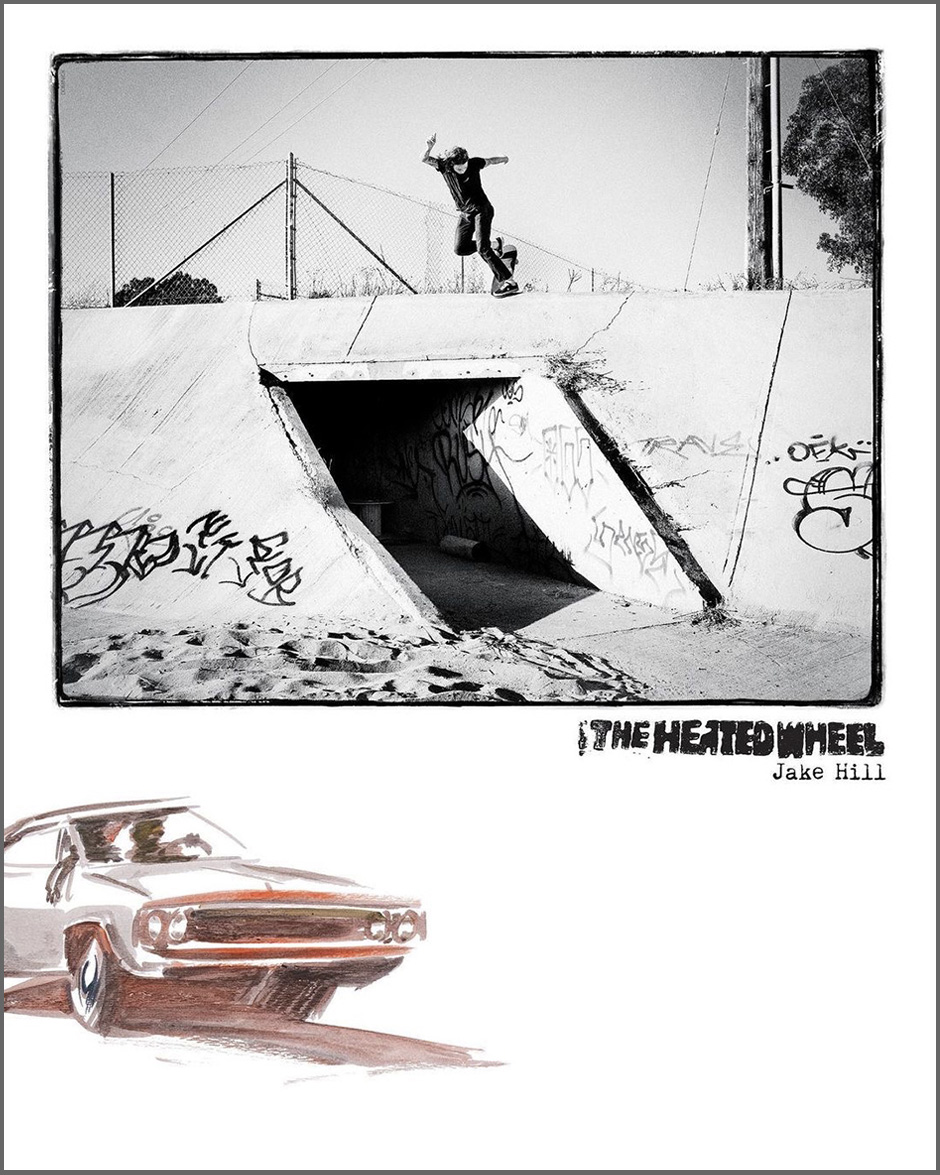 What woodshops do you use? The Heated Wheel boards are made in different places, right?

BBS makes all the decks now. Paul Schmitt made some Polarizers with Formica a while back.

Can you tell me about the Polarizer boards?

Where would the ideal place to take a Polarizer?

Depends what you like. Carving tiles is great, riding places where there’s no coping is also super fun. Banked driveways might be all you need.

Are there any other skateboard companies out there just now that you like?

Vincent’s Cloth will be cool once they get off the ground. They’re going to make replacement bearing shields in every colour. Antihero too. 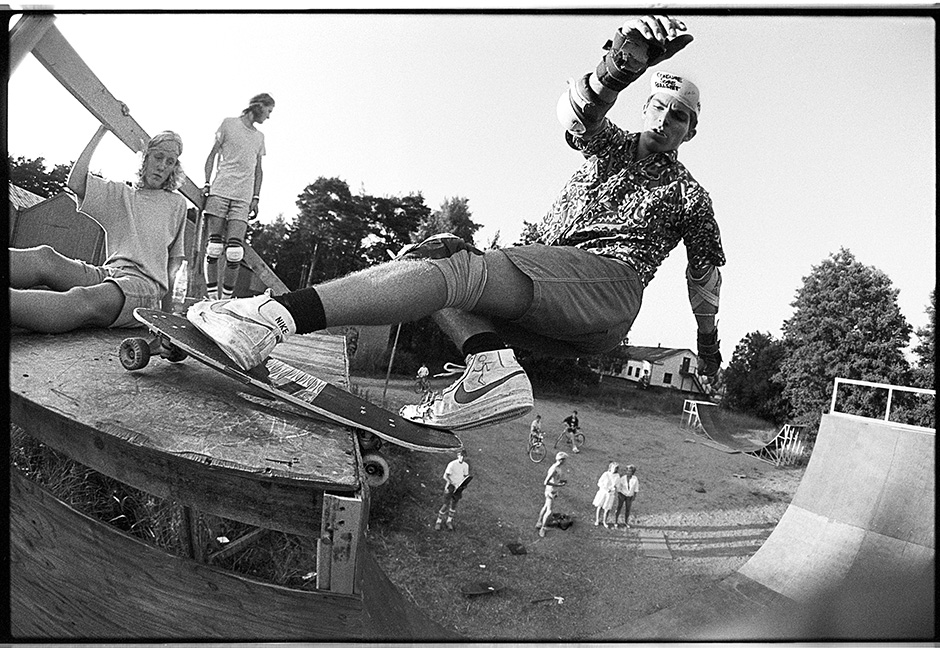 Do you have any good memories of the UK?

The buildings and age of the stuff was amazing. Dobie Campbell let us stay at his flat, he was super cool and he ripped at slalom. Thinking back, I wish we would have gone to see some bands.

How was it staying with Fred McMillan’s parents in Scotland? Fred’s dad was a very famous architect. 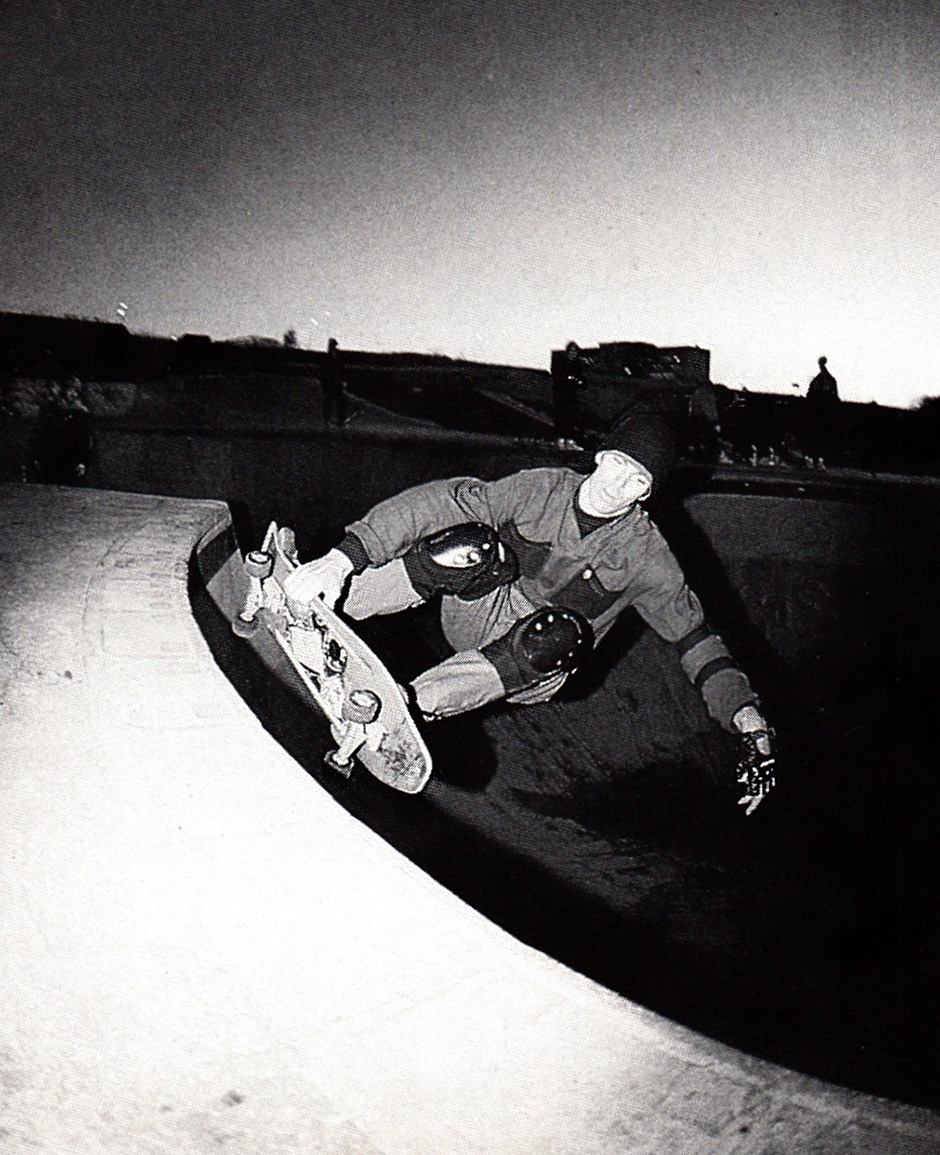 Sampling Scottish concrete. Above the lip at Livingston in 1989

What record have you listened to most in your life?

Hard to say… The Chameleons’ Script Of The Bridge got a ton of play. And the Minutemen’s Punchline record too. Two completely opposite sounding bands… Weird how it’s like that.

Could you compare the skimboarding scene now to an era of skateboarding?

The level of skimming right now is nuts; there’s a lot of shove-its and air occurring. The Wedge seems too easy for these guys, Blair Conklin, Johnny Webber, @timlovestoskim, @billbryan, @geobryan and Nathan Flanagin are just a few. There’s all eras of skating in skimming and surfing.

You can skate a long-gone spot for the day with five friends at the height of your powers. Where is art and who are they?

Maybe Lynnhaven in Virginia beach, with trees surrounding the ramp, with Lance, Gonz, Tom Groholski, Steve Claar and Duane Peters. I would say Hewitt and Cranston but that’s seven.

Favourite image of Mark Gonzales embedded in your brain?

There was a shot that Spike Jonze took of Mark doing, I think, a half Cab on a quarterpipe in the street or something, and he was wearing a suit coat. It looked amazing. 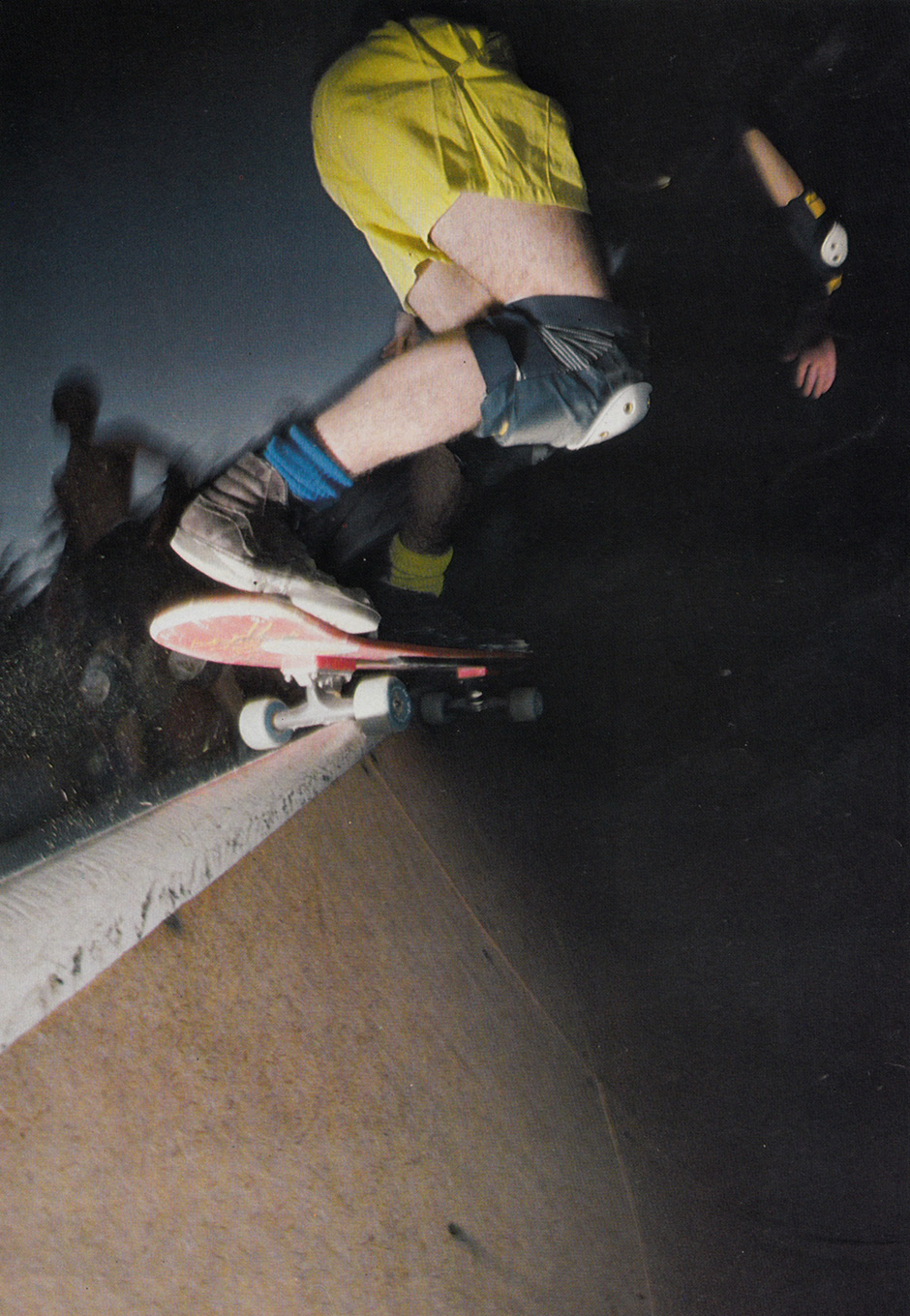 What was the last photograph you took of?

Not sure… Maybe a cat.

When you paint something do you think about the various media that it will be reproduced on?

Do you find it easy to motivate yourself to create things?

Not really. It was when I was younger.

Were your skateboard graphics always your first choice?

Have you got a favourite graphic drawn by somebody else?

The Bic logo is top notch to me. 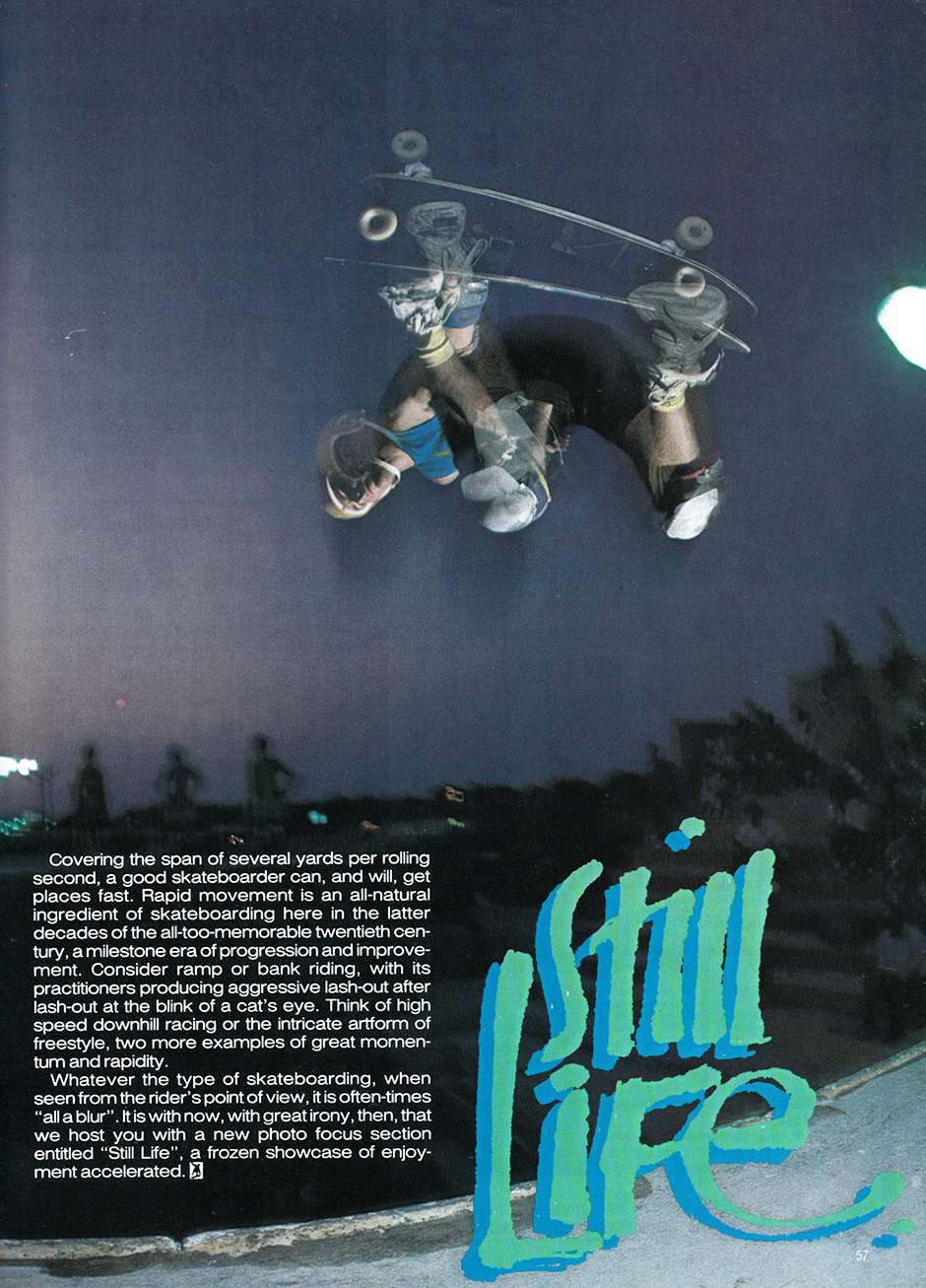 Who did the first real no-comply?

Not at all, no one really knew where they appeared. I always think the Staab graphic on Sims was cool, the one where it’s like a mad scientist with test tubes.

Your ‘street shape’ was introduced in 1989, but had you already been pushing for bigger noses on skateboards? Did you ever redrill your front truck holes?

Yeah, but it would change the wheelbase. Hosoi was first guy I saw with lots of nose. That made perfect sense considering how insane his body jars were, and probably still are. 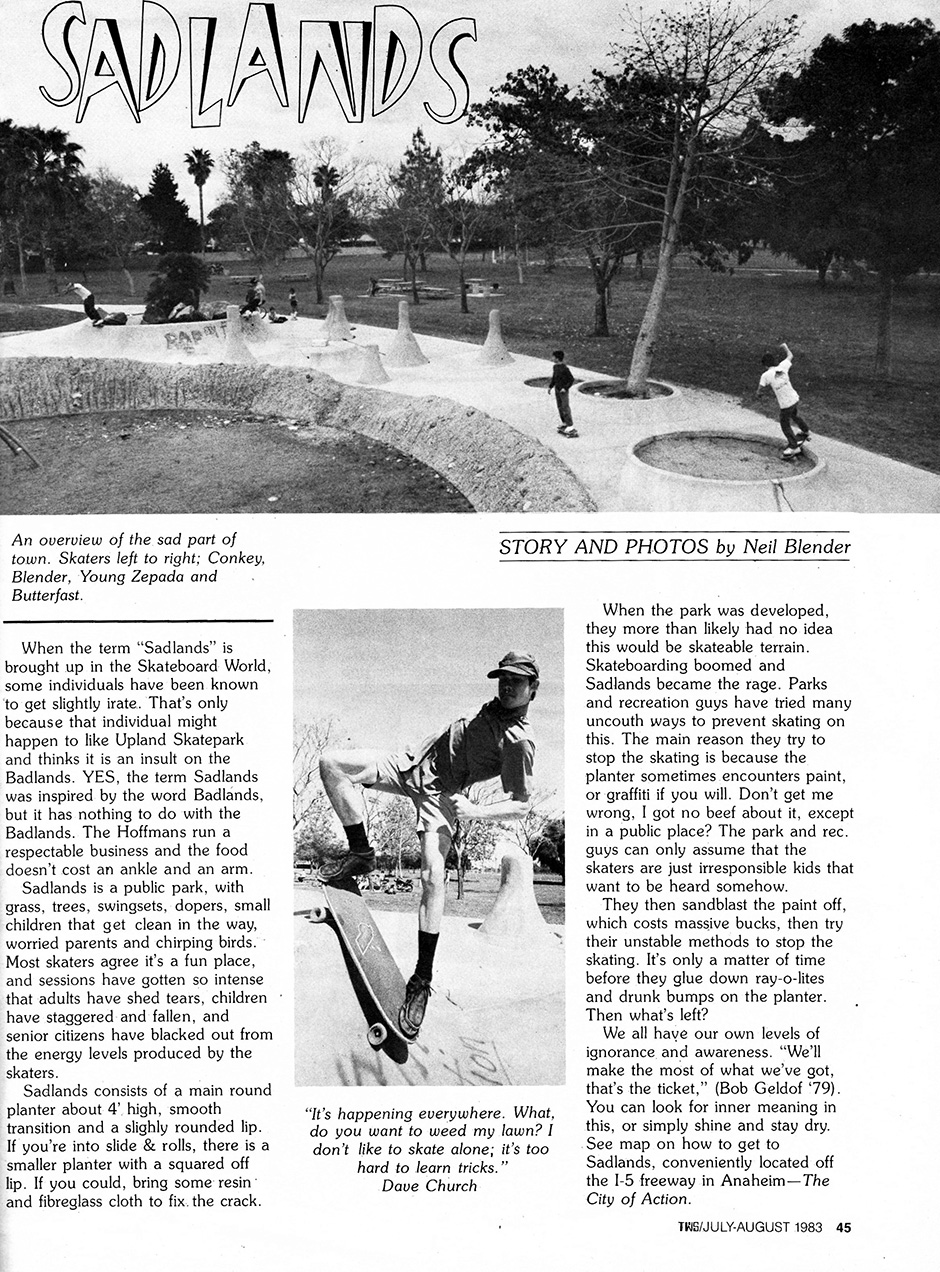 Was it the graffiti that ended Sadlands?

Yeah, too many cuss words. The neighbours got super mad and the parties went on all night. And then G&S started happening.

It got made unskateable in 1990 – was it over by the time you moved to Ohio? 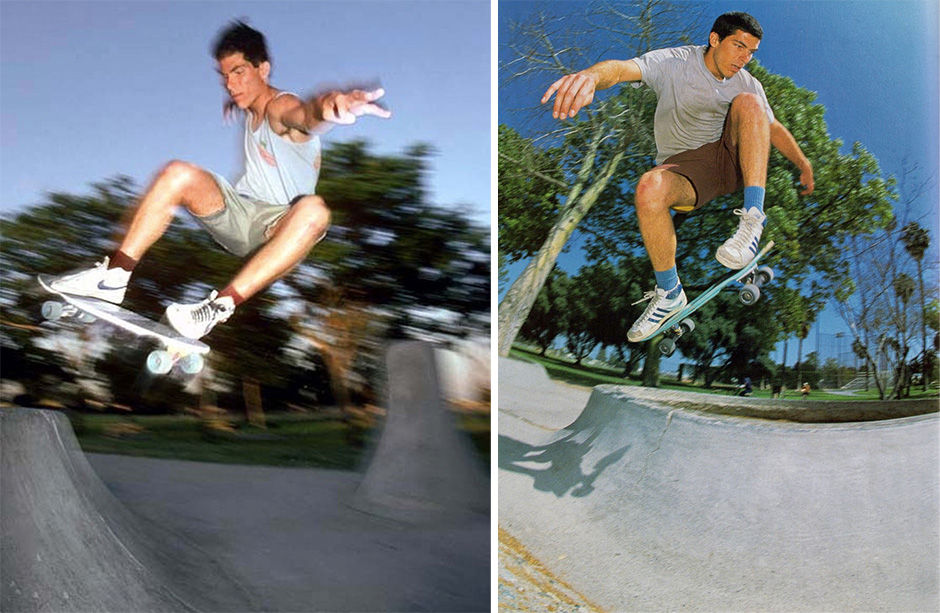 Frontside and backside ollies at Sadlands. Shot by Jim Goodrich in 1983 and Miki Vuckovich in 1988

Was the Eurocana camp in Sweden fun? You said at the time they had the best ramp you’d ever skated.

Yeah. Fun ramp, the first big transition with hardly any vert. That made it good for handplants.

Where was the best ramp in the US?

Did Sadlands get much busier when it started appearing in the magazines? 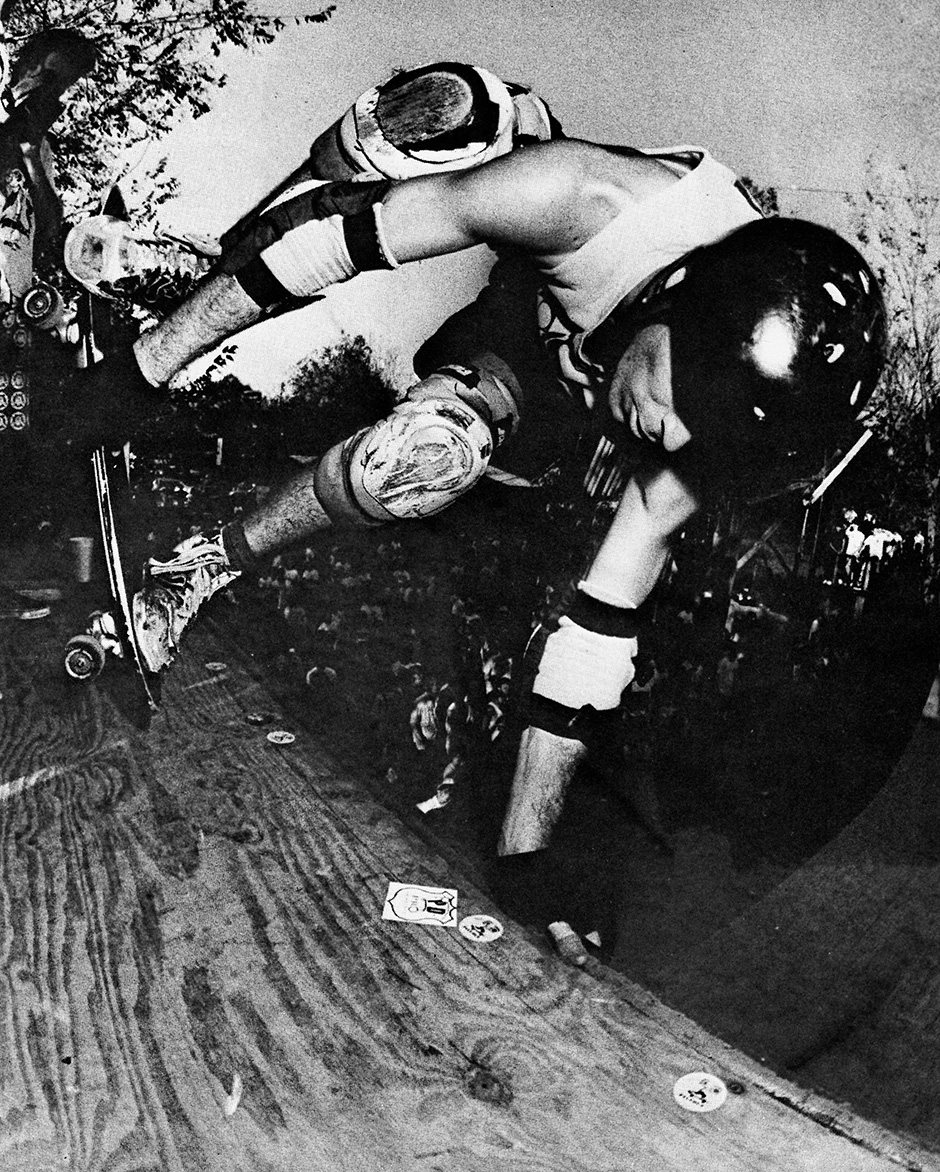 Did the Wooly Mammoth come from trying the Good Buddy? Are they related?

They probably are related, but it’s hard to tell.

GSD said a Sex Change was a frontside invert to Wooly Mammoth, but it came to mean body varial. Any idea why that happened?

People were taking too many ‘shrooms.

Were you paying much attention to other mags when you were making Aggro Zone?

I looked at Thrasher a bunch. 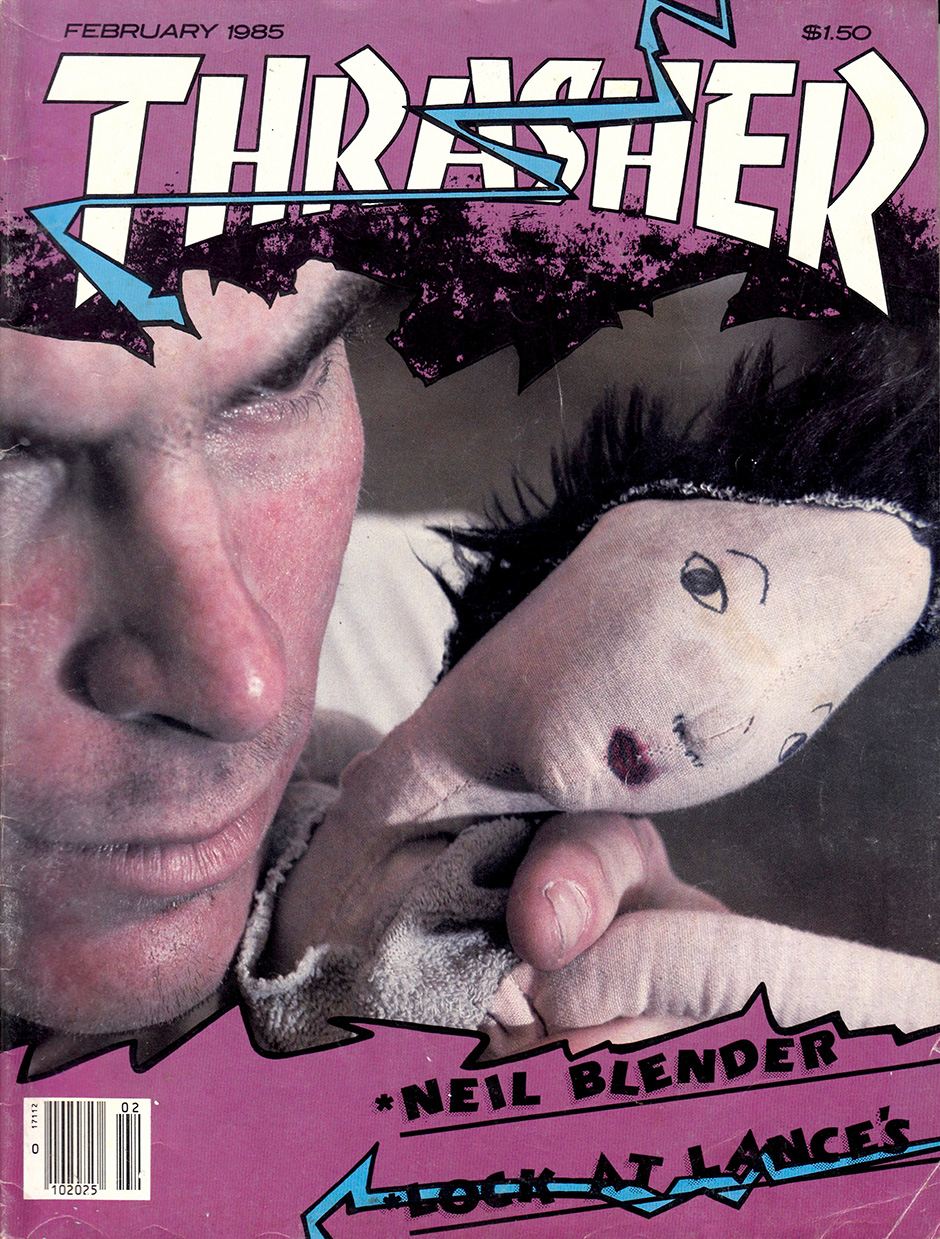 Do you look at skateboard magazines now?

Only what Burnett sends.

Why did Aggro Zone stop?

It was lame. I think I was in the wrong meeting with that. 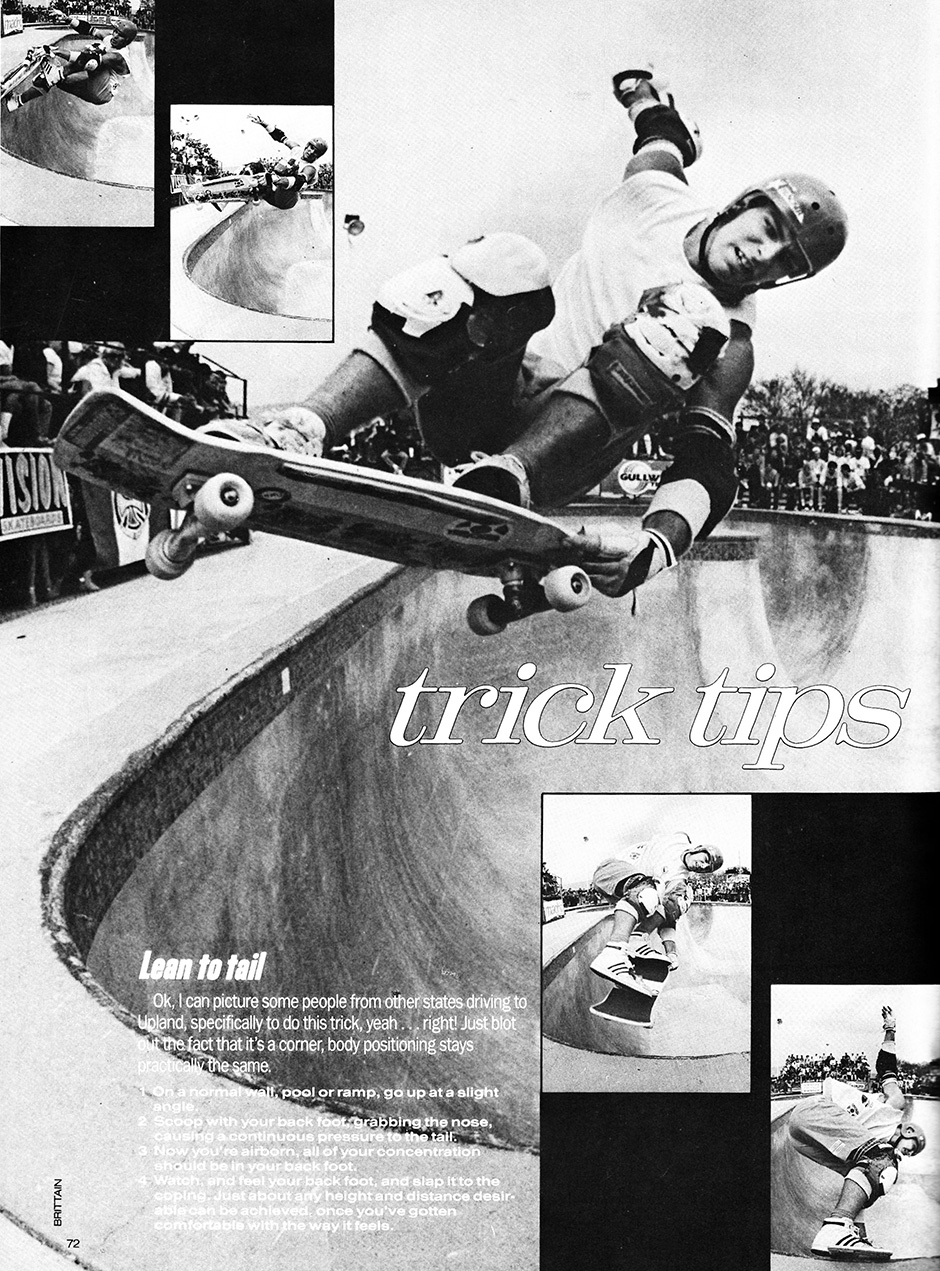 We owe the Lien to Neil. Transworld trick tip taking one to Tail in 1986. PH: J. Grant Brittain

Transworld was known as the more wholesome magazine, but it was way more out there in terms of content and design. Do you think it got a hard time for being less overly-punk?

You said that as soon as you saw the Bones Brigade you wanted on, and were denied, but did that conversation ever come up again? 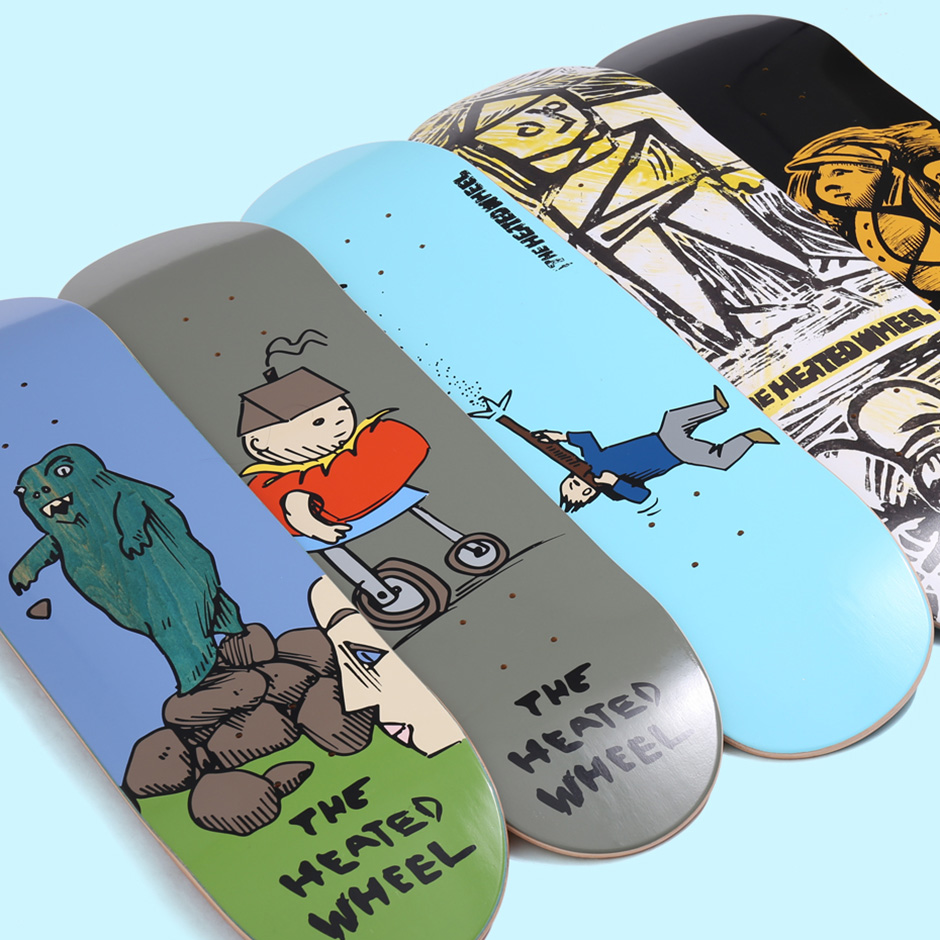 We hope you enjoyed this interview. Be sure to visit our shop to buy boards from The Heated Wheel

We would like to thank Neil Blender for taking time out of his busy schedule for this one and also Ed Dominick and Steve Douglas for their assistance. We would also like to thank the Read and Destroy archive for the Dobie Campbell photo. All other scans courtesy of Science Vs Life.