Then & Now Exhibition Showreel. Filmed and edited by Kevin Parrott

With very little time at his disposal, Waltham Forest resident Kevin Parrott put together this edit of seen and unseen archival footage for the recent Then & Now show. It was designed to be watched in a gallery setting and he consciously gave the footage space to breathe. We would like to thank Kevin for sharing this video with us so it can live on the blog alongside our Everyone On Boards interview with Agnieszka Wood.

The edit features some key figures in Waltham Forest folklore as well as a grip of Slam team riders and is full of home turf highlights. Everything you see was filmed in the borough over the last ten years. We also had the opportunity to speak to Kevin quickly about this edit and the thought process behind it. Read on to find out more.

What influenced how you made this edit?

I needed to put something together for the Then & Now show Everyone on Boards had organised. The video was going to be playing in a gallery space. For that reason an edit of “the best tricks” doesn’t really work, a regular skate edit would get lost. I would have liked to film specifically for it but time didn’t allow so I went through the archives. It’s made up of footage filmed over the last ten years.

It’s all filmed in Waltham Forest?

Yeah it’s filmed in different parts of the borough and the idea is to let the footage breathe a little bit more. The Horsey clip that ends it for instance. That was just me and him on a solo session. This was originally put out as a quick clip but this gave me the opportunity to present the whole thing. The audience rolling through aren’t the same audience checking Thrasher daily so a quick-fire video of heavy shit just isn’t going to work.

It was nice to have the breathing room that the gallery setting afforded, to include the random clips of locals, or my daughter pushing filmed on Super 8. Even including the clips of buildings so people could identify that as being where they live. Having that space meant I could show the audience a little bit more of what goes on when you’re out skating, and what you would encounter within the borough.

There’s some great Jak [Pietryga] footage in there as would be expected.

At the start where Jak’s footage is edited to that old Pappalardo Mr Dibbs tune, that was the original concept for his Cover Version intro that we never used. That was 95% edited in a folder, I put the last couple of clips in and that was done. There are some unused clips in there and I got to use things which just wouldn’t have been given much space in a regular three-and-a-half minute edit.

I liked the slow-mo of Charlie Munro’s front crook.

Yeah even that, that’s running at half the frames it was shot so it looks a bit more fucked up than it is. I could have left that as a super smooth slow-mo but I preferred it to be a bit more choppy looking. 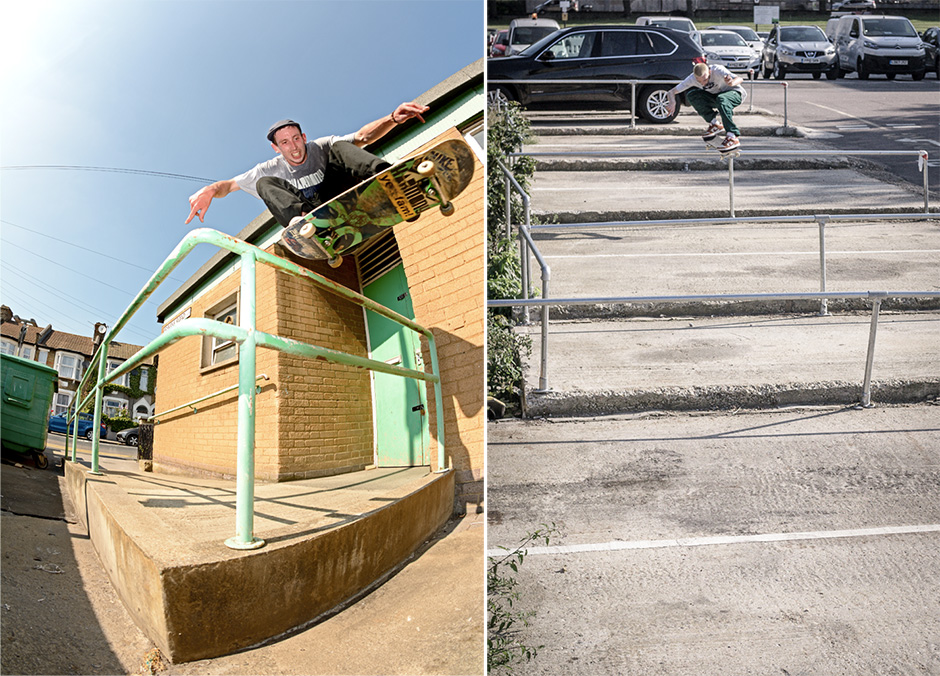 So this explores ten years of Waltham Forest spots, some shorter lived than others.

Yeah for instance that spot where James Bush does the two front-nose combos on the triple drop-down ledge. That spot was amazing but it was quickly skate-stopped by the council. Now it’s like an un-official Deliveroo bike park. There’s a clip in there of Dougie [George] followed by Jake Collins. Dougie does a 50-50 back three out. That’s the exact same spot re-developed, they demolished the log spot only to build another. Bits like that I wanted to include because I felt the majority of people watching would be locals and would recognise it as being the same place.

Kind of a love letter to the borough.

Sometimes. Maybe less of a love letter when you’re talking about spots that were really good and now they’re gone. Waltham Forest council can be a bit backward in coming forwards. It’s a Labour left-leaning council but can still lack a bit of progression.

It’s amazing that the Then & Now exhibition and book showcased how important skateboarding is to the local community, which in turn could be presented to the council.

Yeah it is. Aga Wood doesn’t take no for an answer and is the only person in the borough getting stuff done like that. She’s pushing things forward and that deserves a lot of respect. My daughter goes to the skate sessions they organise. They have lessons, they’ve taken kids outside of the borough, they put on the skate jam at Lloyd park, and now this show. It’s incredible that stuff is happening and that she stepped up to make it happen.

Were you initially going to include much older footage?

I had some older bits and pieces but the problem was time. I had a couple of old lines at the Town Hall from about 1999. They’re not in there because I would have had to go back to the original tapes. There are 23 years of computers that have died in between so I had the tapes but not the time to sift through them. In an ideal world I would have done.

I lucked out on that Horsey clip. That clip is as I captured it from start to finish. For some reason, I captured it like that, a full one-minute clip. That’s quite abnormal for me and for what I would have been doing back then. It was just the two of us that day and people were shouting about calling the police and worse.

The last decade must have left you with a lot of footage to pluck from.

Yeah and it’s by no means an encyclopaedia of every spot or everything I’ve filmed. It’s made up of all the stuff I really liked though. Harry Lintell has got a 360 flip over the red bar which Korahn Gayle switch front heels. That’s from when we were filming Cover Version. When we were filming that video he had so many different versions of that trick. He had so many back tails and 360 flips that we had to figure out what to do. His ender was a 360 flip that was insane too so many ended up not being used. This was a nice place to use some of the stuff which got no airing at the time.

Kevin Parrott ripping on the other side of the lens. Hurricane on a Simon Skipp creation. PH: Rob Galpin

What other projects do you have on the boil right now?

I’m working on a quick project for Emerica with Kevin Baekkel and Matisse Banc. I’m doing something with Darby Gough from Leigh-on-Sea way. He has got the sickest style, so I want to try to get out with him more. I’m also trying to finish up a Barney Page part with a bit of Nick Garcia and Aidan Campbell in there. Then I’m going to be putting together an Ams video for etnies. There are a couple of other projects on the go too, but they’re in the early stages right now.

Thanks Kev, we’re stoked to be putting this out there.

Cheers, it made sense to me because Jak Pietryga, Helena Long, Jeremy Jones, and Dougie George are part of the Slam team and they’re all in there. Also because it was created for the Everyone On Boards show which you showcased recently.

Thanks to Kevin Parrott for the time he took to answer these questions and for letting us host the showreel he put together. Thanks also to Joe Buddle and Rob Galpin for the photos featured above

Be sure to check out our Everyone On Boards interview which takes an in-depth look at the Then & Now exhibition this was made for and the cause which organised it.

If the edit left you wanting more of the quick-footed technical gold Jak Pietrga delivers on the regular then be sure to his Slam TF Mixtape. This features four minutes of destruction filmed at our warehouse. At the rate he is clocking clips right now there will be a part two around the corner in the not-so-distant future.

Finally, if you somehow missed the incredible independent video Kevin Parrott and Dan Magee released in 2019 you need to rectify that. Take some time out to watch Cover Version, this masterpiece features much more from the crew above and others.

Sage Elsesser is back with another colourway of the Fastbreak Pro, a model from the Converse archives he has gravitated towards as his skate shoe of choice...