Produced by Dan Magee and Adam Mondon, First Broadcast arrived on VHS in 2002.

Two years prior, Blueprint had made a formal debut via Waiting For The World – featuring Scott Palmer, Nick Jensen, Paul Shier, Mark Baines, Channon King, Colin Kennedy and John Rattray, amongst others. The company and its videos are amongst the U.K.’s most notable, influential and far-reaching. However, before W.F.T.W., Blueprint held little of the acclaim it would amount to. As Magee explains in First Broadcast 20th Anniversary, American brands reigned and the idea of a homegrown company reaching any stature wasn’t considered.

Whilst carrying Blueprint’s visual identity, First Broadcast incorporating riders from fellow U.K. companies Unabomber and Organic (later Landscape). Made by Magee and Mondon on Blueprint’s budget, the video is a communal offering to – and from – the U.K. scene. “We’re back… And we’ve brought company” proclaims the poster. Whereas an extensive cast list, with respective UK sponsors, adorns the VHS sleeve. (Save for John Rattray who had dipped for Zero, as is discussed in First Broadcast 20th Anniversary.) 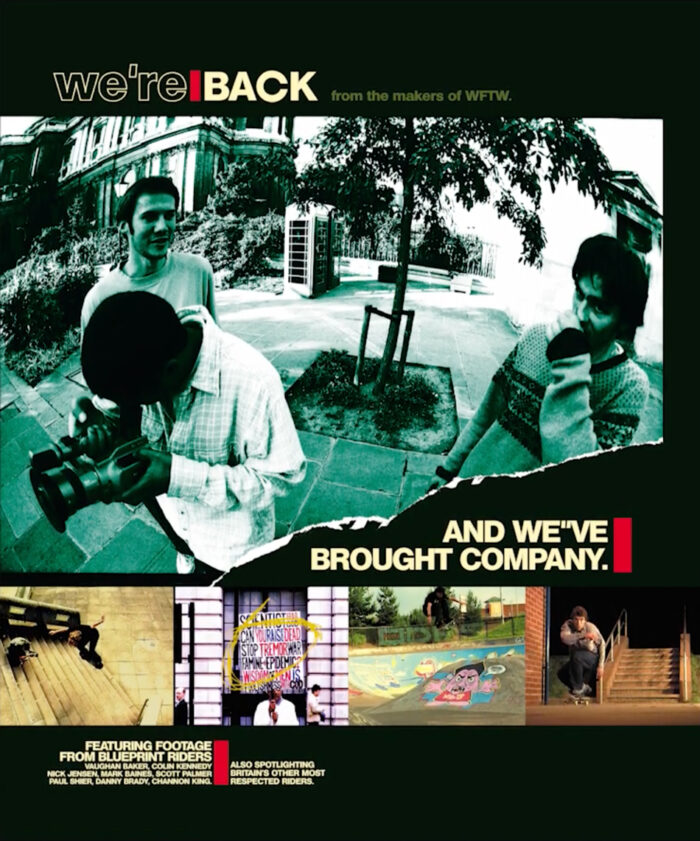 the poster for the video, as seen in First Broadcast 20th Anniversary. design: Dan Magee

Recognisable London skate spots – Southbank, Victoria Benches, Shell Centre, Fairfields – punctuate cold nights, street lights, carparks, and paving slabs. These characteristics resonated with Tom Pickard, curator of the piece. “The tone was dark, gritty and very, very British,” he explains to Grey. “It seemed to me that this video was overshadowed by the success of [Lost & Found], so I have always wanted to highlight how important this video was to British skateboarding, twenty years ago. Lots of things were changing at the time, skaters leaving, new skaters getting on, some moving stateside, some not, new companies starting and the filming of skate videos was rapidly developing.”

Pickard had previously interviewed Magee for Vague Skate Mag, honing in Waiting For The World and his Meet At Benjy’s footage archive. First Broadcast 20th Anniversary is a well executed continuation of his archival efforts, crafted with a level of dedication reflecting its source material. 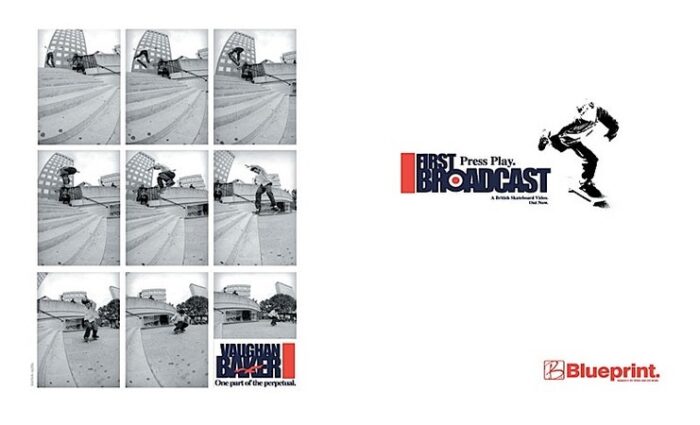 “If there’s one trick that I rewound more than any other, to the point where it broke my copy of First Broadcast, it’s Vaughan’s backside nollie flip down the London Bridge Ten, – Leo Sharp on the above trick which closes the video. The missing fisheye angle is discussed in First Broadcast 2oth Anniversary and our interview with Adam Mondon. photo: unknown / ad design: Dan Magee

Over the years, many of our friends have been involved with Blueprint. They’ve also occasionally graced us with an interview. We encourage you to get stuck into any of the below to learn more about First Broadcast, Blueprint and U.K. skateboarding history beyond…

“Dan was living with Chris Massey who was doing stuff with Organic, the precursor to Landscape, so Chris was in the mix from the outset of First Broadcast. It was a Playing Fields kind of idea with the high production values Dan established in Waiting For The World. The intention behind First Broadcast, from the beginning, was not to have any bias about which company people rode for. It was more a showcase for “the best” of British skating as we saw it … It was a really enjoyable project. Bringing all these disparate but connected skaters together, to create this showcase of all kinds of people.”

“I’d just got on Blueprint and was coming down to stay at Cawdor Crescent with Magee for months on end. Missions were with Nick Jensen, Colin Kennedy and Paul Shier, mostly. Sometimes Frank Stephens, sometimes Olly Todd.

It was rad. The spots in the city hadn’t really been killed that hard, you could film three or four NBDs pretty easy. The crew was sick too. Somedays there’d be six or seven of us filming, getting shit done.

I guess that day at London Bridge stands out a lot to me. It was Toby Shuall, Frank, Jensen and myself and we all were sessioning the stairs. Towards the end, it started driving me kind of crazy. I had to go solo on missions with Magee.”