Welcome to the Skateboard Cafe Profile. This interview with founder Rich Smith dips into the past, present, and future of Skate Cafe… 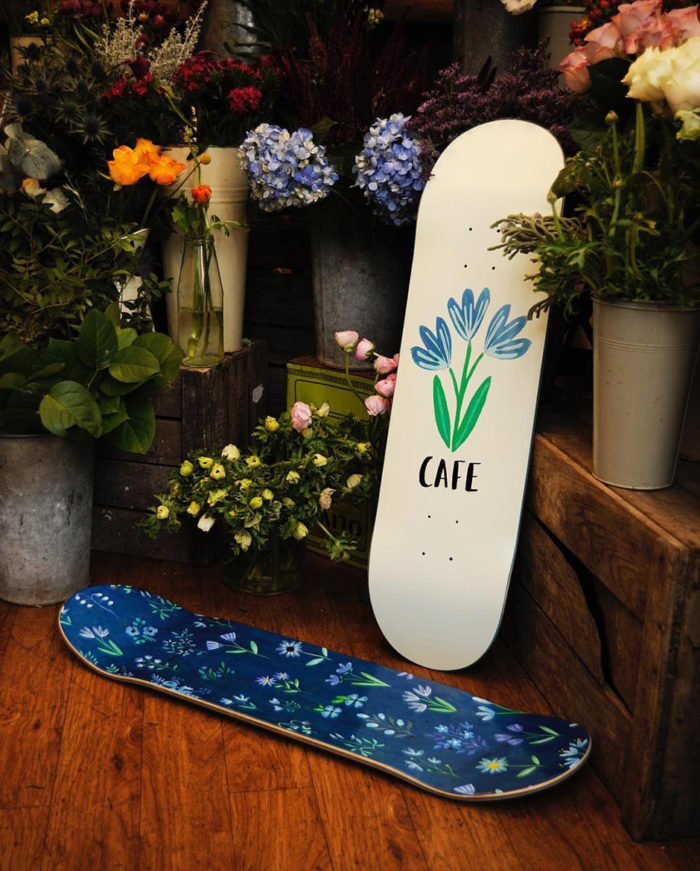 Welcome to the first company profile in what will be an ongoing series. Skateboard Cafe have become one of our favourite companies here at Slam. Their output is steady, we love their graphics and if you haven’t watched their latest video you need to scroll down and get familiar. The idea of this feature is to offer some background to the brands we stock via the people behind them. We were stoked to speak to Rich Smith who offered a valuable insight into the inner workings of Skateboard Cafe as well as the strengths and weaknesses of it’s team riders. Without further ado here’s the profile… 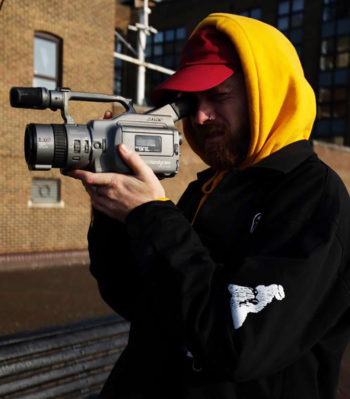 When did Skateboard Cafe start as a brand?

As a brand, to me, 2012 was kind of a milestone. That was the first time we released a small drop of boards and clothing together alongside a promo (which introduced our first official rider Shaun Currie) that was definitely a moment, like shit… Shaun’s relying on us to give him a few boards a month, I hope these boards sell! We were also giving boards to Harry Ogilvie and Josh Arnott around that time.

Before that though ‘Skateboard Cafe’ was the name of a scene video I released in 2008. It became a label for our crew and the edits we made that then developed into making a few tee’s, followed by a few boards and so on. So yeah I’d say the idea started 08, brand 2012.

What inspired the name?

Originally it was simply to give the video a theme, the intro was filmed in a cafe, 50s diner style, checkerboard floor n stuff and had jazz music playing. I just thought that was steez and a slightly different approach than usual. The name kinda stuck after that and as we grew into a brand it was the perfect theme and aesthetic to work with for graphic, music, edits.

What other companies were doing things that resonated with you guys when you first started out?

I’m not sure about any brands we really resonated with, I remember being hyped on 5Boro around then, this edit and this edit in particularly hit a sweet spot for me, especially the music choice… Obviously haha. I was inspired by what Daves Quality Meats were doing back then, I remember visiting their store in NY around 2008, seeing the interior was amazing, all done out as if it was a butchers, t-shirts hung up on meet hooks and stuff like that. That made me think, aye maybe Skateboard Cafe could be a place like this one day, a skate store all themed out like a cafe, serve tee’s on baking treys or whatever… It helped me vision what Cafe could be.

We’re really stoked on all of the new graphics you guys are putting out. What’s the process there, do you do all of that in house?

Cheers! I’m really happy with the new direction we’re taking. It’s a mix, myself and Makepeace cover some of it, the more bold, simple, text based and photo stuff. More recently I’ve found myself bouncing ideas back and forth with Ollie Lock, he has input here and there then we reach out to artists that suit the graphic we’re after. @becki_clark_ @richtpaint and even my dad worked on a graphic for us, so yeah it’s very in house.

We often work with Gaurab Thakali which I’m super grateful for, his art ties in so nicely to our aesthetic. He’s responsible for Dom’s debut pro board, Sax Flowers, the 4 board bar series we did…

It’s been cool watching the company grow organically to the point where it’s at. Has it been a trip watching it evolve?

Yeah it’s pretty crazy, from filming my mates for a little scene video to now having a full-blown company, a skate team to look after, and product being sold all over.

Having a Cafe edit on Thrasher for the first time was a trip! Knowing people all round the world will see us skating and fucking around at College Green haha

“it’s pretty crazy, from filming my mates for a little scene video to now having a full-blown company, a skate team to look after, and product being sold all over”

The whole thing began with your love for filming and your edits define the company. Is that still your favourite role?

Yeah as much as it fucks my back and ruins my social life I love it haha. My motivation for the whole brand continues to stem from filming and making edits with my friends. I also really enjoy the process of working on graphics… It’s similar to the feeling of editing, you make a rough draft, develop the idea a little then export a final version your happy with. Anything where I’m creating is my favourite roll.

What videos inspired you to pick up a camera?

I was mostly inspired by local vids growing up, Jus Foolin and Bristol In Bloom in particular. It was sick to see footage of some of the skaters you’d see out and about on a daily basis, skating spots you know. Then a little after that I used to buzz off of Lost & Found and Static 2 (Josh Stewart keeps inspiring me to pick up the camera! I just don’t understand how he can still walk, how do you do it Josh?)

What was the response like to the new video Ensemble?

I had a feeling it would get a good response but not like this, it’s getting shared all over the globe and getting such positive, genuine feedback. Quartersnacks wrote on their site saying the vid will still look good in 10 years from now, does it get much better than that? Haha definitely hyped to move onto the next thing and glad we now have our own platform to build on.

Which premiere went off the most?

Manchester was the most rowdy haha, we ended up arriving late (due to some insane technical difficulties like my laptop dying during the final export and a shit load of traffic amongst other things I can’t even go in to) so it meant everyone had time to get nice and steaming before we arrived. Was like walking into a busy pub after a football match. 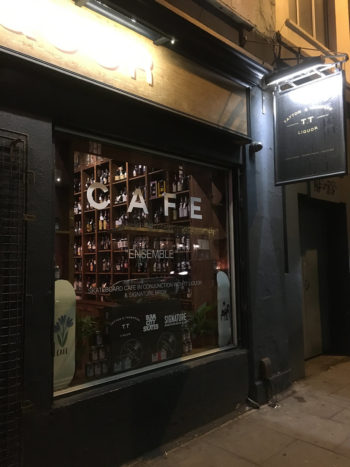 London was pretty special though, big thanks to the guys at TT Liquor, they hooked it the fuck up. Cocktail bar / cinema with a few different floors, they decked out the window for us, sorted drink sponsors, made us custom Cafe drink menus… Seriously the best venue you could ask for.

The video is banging, such an amazing array of styles too. You must be stoked on where the team is at now?

Yeah I’m stoked on the diversity of the team. We’ve been around long enough now to have a nice mix of a few generations too, from Sam (Philly Slugs) and Savannah who are like 18/20 to guys like Harry and Dom in their early 30s with everything in-between. Trips feel like a big tweaky family vacation haha

Who is the most surprising person to film?

Korahn continues to surprise me, I wasn’t expecting much from him for Ensemble as we had both kind of agreed he was taking a back seat on this project to focus on finishing up his part with Magee and Kev and also to make this vid more about the new guys. He ended up filming 30/40 seconds of footy in the last few weeks of filming. I know that’s classic Korahn but it still surprises and amazes me.

We were really happy to see Dom Henry’s love letter to Fairfields. Such a sick send-off and then the second part was poetic too. He’s a firm favourite here. Did he know he was going to be turned pro when the video dropped?

Yeah the Fairfields section was Dom’s idea, I still don’t get how he skates that place so well… It’s so grim and crusty! Dom knew he was going pro, that was the arrangement as soon as he got on. It was just a matter of when and with the launch of the vid felt like the perfect time. The idea for the stand up comedy graphic was actually his too, passed on to the man Gaurab who absolutely nailed it.

While we are on the subject of team riders we asked you to run through the team as part of the company profile. Introduce us to the family… 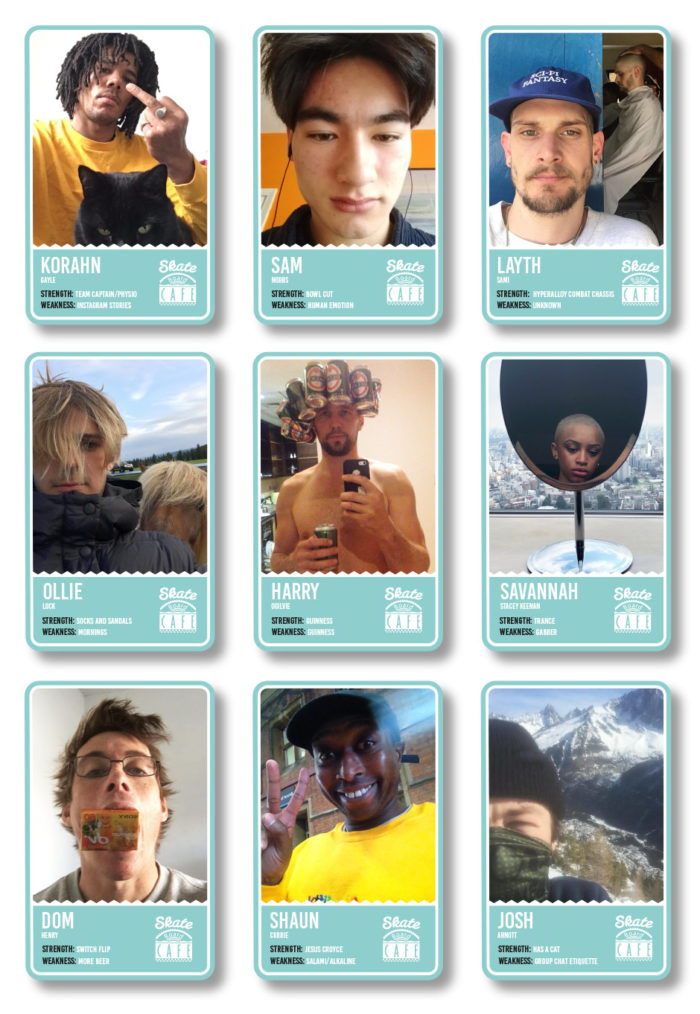 What can we expect this coming year from the Skateboard Cafe? Are you straight onto the next video project or having a breather?

The plan is to work with new artist and explore new graphic avenues as well as releasing more than 2 drops a year. I’m currently having a little breather from filming to rest my back but as soon as that’s better we’re gonna be making more frequent, shorter edits through out the year and keep the YouTube channel pumping.

Words of advice for anyone wanting to follow in your footsteps?

Besides doing it for the right reasons (because you love it and not to make a quick £) I’d say if you have an idea don’t be too precious with it, don’t sit on it until it’s too late… Just get it out there and let it start developing because you never know what it could become.

We hope you enjoyed this informative conversation with Rich. See everything we have from Skateboard Cafe