Tony Alva is one of the most influential skateboarders of all time and he has more than a few stories to tell. He was hunting out backyard pools in the early seventies and has seen the thing we love grow firsthand over five decades. It was an honour to have him visit our shop in Covent Garden recently when he visited for the House Of Vans opening. We asked him a few questions briefly after the Vans Legends Meet & Greet…

Perhaps more than anyone you have seen skateboarding evolve firsthand and been an integral part of that evolution. Can you talk about that, are you excited by what is happening today?

Yeah for me it’s been an organic evolution. Skateboarding has evolved to a point to where it’s different but in a lot of ways it’s not that different. Really what it is is the essence of skateboarding, the reason people skate and the reason people got involved in it including myself is because it’s really fun. Even though we’ve seen all these technological advances in the equipment and the things guys are doing on boards in the skate parks kind of coming back. It’s still all about skating you know, the main thing for me being a surfer, I always wanted to surf/skate, to be able to skate stuff that represented that correlation that I have always associated skateboarding with that it’s like a concrete wave. I’m still in search of the perfect concrete wave. It’s still about fun and searching out new terrain. I get burnt out on skating the same thing all the time so when I get to come and skate something new like today at the House Of Vans it’s a great experience because that is where the search and the whole thing continues for me.

You are here to see the House Of Vans park open. We are stoked that new parks are opening, how did you find it and where would you say is the best park you ever skated?

Well you know, the indoor thing in England is really crucial because of the weather. Some of the best spots that I’ve ever skated in England have been indoors so this is a continuation of the history of skateboarding in England. Especially here in London this very cosmopolitan and metropolitan City. It’s a trip today to be here somewhere historic, you know the Slam City Skates thing and the Rough Trade records thing. Basically one of the guys who was here today at the signing was one of the kids who came to see us when I was here for the first time at 19 years old. The London demo I did was at a theatre (Astoria Cinema, Old Kent Road) they had a bowl, a big bowl called the Mad Dog bowl and that was my nickname as a kid when I was on the Dogtown team. So that was pretty cool, it was great to be reminded of that. It makes me really grateful to be a part of skateboarding at my age still and to be influential to that world. But in England, I was the first American to come over here, I was the first one to skate Southbank. Obviously the skate scene here has been very enthusiastic from the get go, I still have fans from even back then and I’m always making new friends. Back to what I was saying about the indoor skate spots, without that sometimes it’s difficult for skateboarders in a place like London to find places to skate and survive so what I see is it’s a continuation of the survival of the fittest and Vans is part of that, we like to give back. I’m one of the Vans team riders and by giving back what I mean is being part of and being part of is just showing up and skating, doing what you do best and being part of the scene.

Signing an Alva board next to Christian Hosoi

Well I think you have to figure in the competitions, if you are a professional skateboarder part of your job is to compete. You are endorsing sponsors products, you are getting out there and trying to keep yourself in the mix. Being in the mix when I was a kid was super important. I think being a part of supporting the competitions although it can be tedious and sometimes you’re not into it it’s still an integral part of everything that represents the growth of something like skateboarding. It can be a double edged sword but I think the more that we support it the more that we grow.

Who on the Vans team right now stands out to you as pushing the limits with the same energy and approach that you brought to the scene?

All of the guys do their part, I think that Curren Caples is really exciting and fun to watch. Anthony Van Engelen is out here with us, I really enjoy watching him skate and I know that he has mad skills and really good style. Some of the old school guys like myself and Steve Caballero and Christian Hosoi and everyone in between. Pedro Barros is one of my favourites to watch, he is pretty amazing. There are always a lot of really good guys coming up, I saw Tony Trujillo skating a week ago and he’s still going strong. Geoff Rowley, the list goes on. Everybody is really grateful and stoked to be a part of this program. Steve van Doren has always been an important part of our relationship with Vans and to have him with us here on this trip is amazing. He is like one of us regardless of whether he is on a board or not.

Signing for fans of all ages

You started skateboarding 46 years ago, what advice do you have for those of us aspiring to have that longevity?

It will be 47 if I make it to September of this year. Health is really important, diet and exercise. The thing for me is that the cross training with surfing has helped so much. It’s amazing you know how much I get from having a conscious contact with nature and a higher power. That is really what keeps me connected to what life is all about. I would say other than that, don’t try to get too into selfish, self centred motives. Attachments, there are a lot of things you can become attached to that involve the ego. For me as a young man I had to learn from having issues with egocentric behaviour. Now the more patience, humility and love and tolerance for all my brothers who skate too means I have a better experience from that. It means I can carry on and share some of the wisdom I have learned from making mistakes. I have made plenty of mistakes but I have also done some good things too. There’s a saying in our little fellowship on the West Coast in Los Angeles that everything I did back then is what got me here. I really don’t have any guilt issues or anger and resentments that come from the past. I use those things as a growing curve and experience to basically become wiser and have a bit of humility. Therefore my skate boarding experience is a good one because of the fact that I enjoy what I do, I don’t feel like I have anything to prove to any thing or person, the only person I prove it to on a daily basis is myself. I feel comfortable with who I am and that is part of my growing up in the skate boarding community and being a leader instead of a follower, that’s what I share with everybody.

What’s your favourite thing about London?

My favourite thing about London, I would say my favourite thing about London is the ethnicity. There are so many different creeds and cultures represented here. I really love that about it, the cosmopolitan element of London is really amazing. Fashion, food, the theatres. I have been a huge huge fan of music from England. I’m a huge fan of The Clash, of The Rolling Stones, I’m a Beatles fan, the list goes on. Cream, I could keep going forever, when Jimi Hendrix was here that was super influential to me. When I learned to play bass guitar I learnt from playing Hendrix songs or songs from the first Black Sabbath record. All that stuff is an integral part of my life to this day. It has a lot to do with skateboarding, it has a lot to do with having Led Zeppelin songs in our head when we were surfing or skateboarding. Without those English rock bands I don’t know if we would have had the rhythm that we had at that time, we were fuelled by a lot of English rock. You can even tell from how I answered this question, it gets me really fired up, I’m excited about that stuff. I play in a band that’s influenced by Pink Floyd, a lot of the different things that influence me in my life come from English culture. Even though America eventually broke away from the restrictions and limitations of being associated and governed by a Country like this it’s kind of a trip that even as far as the underground you guys still have a hold on us. It’s through other parts of culture and one of them is Rock and Roll. Although the blues and other American music influences Rock there is still always that connection. Music for sure would be my favourite thing, lets just say the arts from a City like London. But look outside I mentioned Black Sabbath, you mention Joy Division, there is a lot of really cool music from outside of London that is very English, The Damned. I could keep going, the list goes on. Being a musician is an important part of my life, being a surfer, that’s what I can bring to England. Being a skateboarder last but not least is connected to all those things. It’s like they say, my web is wide but wherever I go I bring that bit of spiderman with me. I can make my bed, I can come to London and feel very comfortable that I know what I can bring but I know what I’m experiencing and how valuable it is to be able to really experience the culture of London and not only be an observer but also a participant. That was a good question, thanks.

END_OF_DOCUMENT_TOKEN_TO_BE_REPLACED 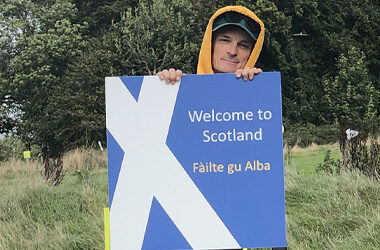